The Long Goodbye
The discovery of two escape pods in orbit around a distant world lead to Weir and Sheppard
playing host to the final few days of two personality imprints. Claiming to be man and wife
the truth is only revealed when the shooting starts. 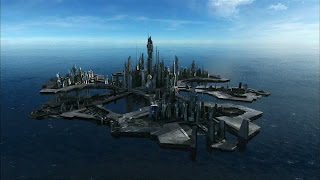 Coup D'etat
Teams start to vanish and Major Lorne and his are believed to be dead but investigations reveal
a much darker agenda and meanwhile the Genii are offering a ZPM in exchange for weapons with
which to pull off a coup and put a new government in charge.
Colm Meaney reprises his role as Cowen and Laden is played by Ryan Robbins (Sanctuary).

Michael
The Wraith retro-virus is tested on a captured Wraith with very promising results but the folly
and arrogance of such a plan is shown when the prisoners memories and desires start to return.
The first episode in what will become a pivotal plot for the rest of the series.
Connor Trinneer (Enterprise) guest stars as Michael.

Inferno
Coming to the aid of the Taranian people who are having issues with their Ancient based defence
shield Mckay discovers that the geo-thermal energy used to power the shield is putting extreme
pressure which is pushing the super volcano to the point of eruption and that is a planet killer.
Brandy Ledford guest stars as Norina with Kevin McNulty as Lycus. 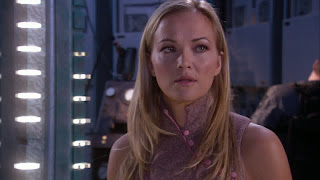 Allies
A Wraith Hive ship tracked for the last month arrives in orbit above Atlantis bringing a surprise
visitor. Faced with a new opportunity the two enemies agree to pool their resources with the goal
to convert Wraith into humans for the remainder to feed upon reducing the overall numbers and
creating a new balance in the galaxy.
Andee Frizzell once again plays a Wraith Queen.
A traditional oh my god SG season cliffhanger. 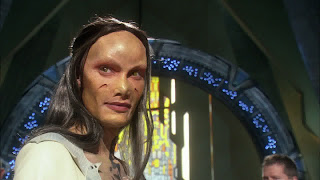