The Hive
Prisoners on board the Hive ship so much for Ford's brilliant planning. Faced with interrogation,
torture and betrayl the future looks very bleak as does the people of the world about to be culled.
A good conclusion to this two parter, stunning CGI and some interesting tweaks to the
Wraith mythology.

Epiphany
A protected society becomes the home for Sheppard when he is unable to pass back through
it's barrier. Time moves on and months later he had accepted the world he now lives in and
even protects the village from the beast that preys on these people but his friends have not
given upon resucing him either. An interesting story or acceptance and community with the
Ancient angle fleshing out their back story. 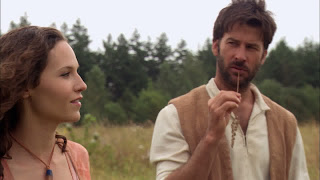 Critical Mass
The Trust/Goa'uld infiltrate Atlantis with the intent to destory it and make sure they Wraith
are unable to encroach on the Milky Way.
Who is the mole, someone on base or someone on the Deadalus?

Grace Under Pressure
A repaired jumper is taken for a test flight and crashes in the middle of the ocean.
McKay is trapped as it sinks into the depths and his head injury leads to some interesting
conversations with himself and a version of Sam.
Wonderful epiosde with Amanada Tapping guest starring. 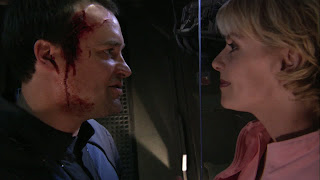 The Tower
A socity controlled by a small elite with access to Ancient technology captures the team with
the intent to gain access to genetic element that Sheppard posesses to contine the ruling blood line.
Peter Woodward (Crusade) and Jay Brazeau (SG1) guest star.