There have been many takes on the classic revenge/obsession tale of Herman Melville's Moby Dick, maybe the most well known is the 1956 Gregory Peck theatrical release. Since then we have had a 1998 TV mini-series and a 2011 tv series both of which in terms on production and intent stand head and shoulders above this movie.
That said the core of the story is there even though the names do tend to jar a little in a modern context or more to the point Battlestar Galactica has nicked a few of them and a lot of the audience may be more familiar with that show.

So the movie starts with action from 1969 and a submarine ( USS Acushnet ) under the ice cap in soviet waters as they encounter what they believe is a new Russian sub but turns out to be a large biological which then takes the sub out. There are only two survivors Ahab and Boomer but more of those later as the movie jumps to present date with whale biologist Dr Michelle Herman played by Renee O'Connor doing research from a boat (The Coffin). She is then appropriated by Lt Commander Starbuck under the command of Captain Ahab on his latest nuclear submarine (USS Pequod) personally refitted to be the most advanced in the fleet. Whilst onboard she learns of the existence of Moby Dick and listens to the sonar recordings from the 1969 contact and then the chase is on. 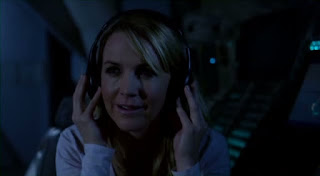 We have an ongoing sub-plot as the Admiralty react to Ahab failing pre-arranged check ins and with shipping disasters throughout the oceans the finger of suspicion is pointed at Ahab and thus Boomer is recruited to investigate prior to pro-active action being taken. Much of the story from then on pretty much covers various contacts between Moby Dick and the submarine as well as a number of red shirt ships that get munched on by the Whale and as the death toll mounts the obsession shown through Ahab grows and becomes his defining characteristic leading to the ultimate face off. 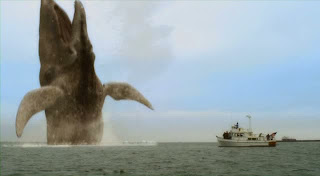 The movie produced by Asylum actually looks pretty good, the cinematography a lot of it on the water is good and even the submarines are not bad something lower budget productions often fall short on. The underwater CGI works very well but often falls a little short when above the waves with technology (Osprey, Helicopter) needing more texturing and the Whale looking very fake at times, mind you a whale that size is always going to be hard to get right without a lot of the visual cues something like Godzilla would have walking through a city. Still the production is impressive for a "b" movie and you always have to judge this sort of movie in context, no point what so ever comparing it to a bug budget theatrical monster/disaster flick. 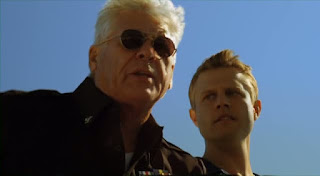 Barry Bostwick hams it up wonderfully through out the movie ramping up the emotion and mania with every scene but despite a strong start Renee O'Connor's role takes more of a background position. Overall I really enjoyed this movie, it looked good and has lots of action without being too cheesy or amateurish and well it's a giant monster movie so if that's your thing you'll be quite happy with 2010:Moby Dick.