The Brotherhood
Armed with gate co-ordinates to a number of worlds that should contain a ZPM the team
visits the world of Dagan. The ZPM had been protected 10000 years ago by an order of monks
who were then culled by the Wraith so armed with only clues to it's location a treasure hunt is
undertaken but unknown to them the search reaches the ears of the Genii.

Letters from Pegasus
With the arrival of a Wraith fleet just a couple of weeks away Sheppard and Teyla go on a
recon mission while back on Atlantis McKay works out how to get a message to Earth and
with 1.3 seconds of digital data personal messages can be included. This is brilliant episode,
we see the Wraith in full culling mode as well as some of the major and minor characters
expressing themselves to the camera, some are very funny and others moving. 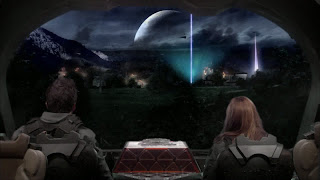 The Gift
Teyla is having trouble sleeping and is more troubled than those around her by the arrival
of the Wraith. She visits her people on the mainland to get advice from an elder and hears stories
of her ancestors including tales of some who were taken and then returned. Armed with this
knowledge she attempts to make telepathic contact with a Wraith but finds their minds too powerful.
A mixed episode, yes they had to lay the ground work for the revelation with Teyla but the suspicion
and threats were a little too telegraphed, that aside building nicely to the finale.

The Siege (Part 1)
McKay and Grogin (Craig Veroni) go to the weapons platform with the intent to repair it as it will
be in the path of the Hive ships when they enter the solar system, as they know it is dead
(from the last war) they will not be expecting the ambush. Meanwhile back on Atlantis the search for
a Wraith is under way and work towards a reliable self destruct method is devised.

The Siege (Part 2)
The Wraith are knocking on the door but events in the Milky Way have allowed for re-enforcements
to arrive armed with heavy weapons and nukes with which to put up a viable point defence of Atlantis.
Of course the Wraith were smart enough to handle the Ancients and it's little arrogant for Earthlings
to expect to win this battle but the stand has to be made.
The Siege parts 1 & 2 are an excellent conclusion to the first season, we get lots of action, CGI
which would not look out of place in the theatre and a few surprises and if combine them with
Rising 1 & 2 and you have top quality bookends for the season. 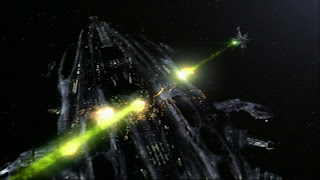