Battlestations! by Diane Carey
My rating: 3 of 5 stars

Battlestations! by Diane is the sequel to her novel Dreadnought! and makes full use of the same main characters along with the usual crew of the Enterprise. In this story Lt Commander Piper fresh from her promotion is living the command track by working on Kirk's ocean going sail boat when Starfleet security beam onboard to "escort" Kirk and any of his command crew to headquarters. He doesn't reveal that Piper is aboard and when he is beamed away she evades capture and meets up with her new command (arranged by Kirk).
It turns out the Sarda the young Vulcan weapons specialist is believed to be associated with the theft of classified cutting edge transwarp technology during the chaos of the Starfleet investigation into the treason and corruption within the ranks. Piper once again teamed up with her friends warps towards the planet Argelius intent on finding out the truth but find more than they bargained for when the technology is put to use and a mad scramble by numerous galactic powers leads to a shooting war to possess the technology.
Battlestations! is a fun read but not quite upto the standard of the first novel although I have to admit the scene painted by Diane of Kirk at the helm of his ketch named "Edith Keeler" is something I would have so loved to have seen on screen.

View all my reviews
Posted by Jarrak at 16:00 No comments:

Enterprise: The First Adventure by Vonda N. McIntyre
My rating: 5 of 5 stars

Captain James Kirk takes command of the USS Enterprise for the first time and is given a "milk run" by the Fleet Admiral both to allow Kirk to get to grips with his new command and to offer Heavy Cruiser support to the Federation/Starfleet interests in the region of space known as the Phalanx.
Kirk hasn't got everything his own way though, he has been lumbered with a Vulcan First Officer and denied the opportunity to be part of a rumored huge expansion in the long rage exploration voyagers so does not take too kindly to his new orders or the need to ferry a vaudeville group who are tasked with bringing entertainment to the Starfleet personnel on these isolated bases.
On the journey Kirk learns to compromise and be a little more flexible so when the Enterprise is ripped from warp drive by a huge alien construct he is ready for a first contact of epic proportions.
I enjoyed reading this novel as the careers and lives of the crew of the Enterprise prior to their televised adventures are of immense interest, what made them who they became and how fragile the events were that put each into a place to create a legacy within the Federation and beyond.
Enterprise: The First Adventure is by no means an action packed romp but a story that concentrates on who these people are and more to the point what they would become and in that it was most satisfying. It also has to be said that the inhabitants of the "worldship" are truly one of the best advanced cultures I've encountered in all of Star Trek lore.

View all my reviews
Posted by Jarrak at 15:43 No comments:

Long before the Federation was born or humanity even hoped for the Stars the population of the Hydrilla sector were wiped out and an extensive study by a Vulcan led expedition is unable to explain why. There were however some strange deaths within the expedition and upon their return the relatives of Sarek pay him a visit with a gift found when excavating the ruins of the civilization. Meanwhile the Enterprise is returning the last of the expedition to Vulcan when there is a brutal murder, the pattern is repeated again and again even on Vulcan, slowly a madness spreads consuming rational and intelligent beings turning them into sadistic killers...
Demons was a good read, I always enjoy stories that center on the Vulcan culture and to see part of Spock's extended family was interesting. You'll also recognize the well used scifi theme of alien possession and it's done in a clever way in the novel and never gets absurd. What adds a lot of depth is the writing for the secondary characters which is very strong and allows the main group not to be the focus of the novel, in many ways it's the Vulcans and Enterprise security personnel who make the story shine rather than Kirk and Co.

View all my reviews
Posted by Jarrak at 08:31 No comments:

Dreadnought! by Diane Carey
My rating: 4 of 5 stars

Dreadnought! was a Star Trek novel I always enjoyed reading and bares a striking familiarity to a certain recent Trek movie given a super secret starship with all cutting edge technology and weaponry being used to further an individuals agenda and force the Federation down a certain path.
In this story the central character is Lt. Piper a young officer who is posted to the Enterprise at the request of Captain Kirk after she shows an interesting approach to the demands of the Kobayashi Maru. Soon after arriving onboard and meeting her roommates the Enterprise is assigned the task of retrieving the stolen Dreadnought "Star Empire" and Piper's ID is attached to the demands of the "terrorists".
This was and remains an entertaining read, over simplistic perhaps but that was par for the course at the time yet the novel retains pace and tension as the factions fight for control of the ship but for different reasons. Kirk being thrown into the mix has to decide who he believes and how he'll use his command and influence to resolve the situation before and after the shooting starts. If you do enjoy the novel then many of the characters return in the sequel "Battlestations" another entertaining Trek read from Diane.


View all my reviews
Posted by Jarrak at 12:03 No comments:

I ordered three Vinyl Vixen figures the other day, Catwoman, Wonder Woman and Harley Quinn (pre-order) and they look fantastic:) 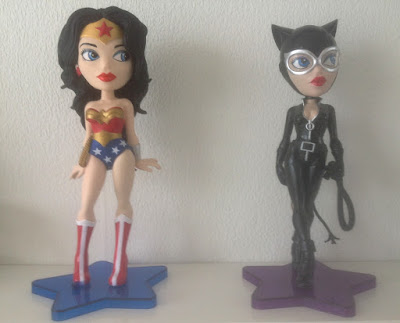 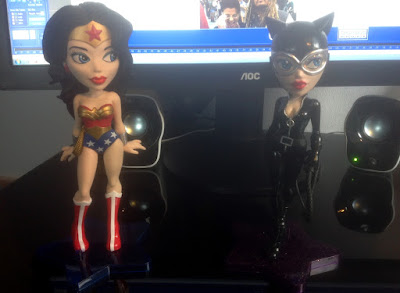 Crisis on Centaurus by Brad Ferguson

Crisis on Centaurus by Brad Ferguson
My rating: 2 of 5 stars

Crisis on Centaurus is a strange beast, there is a lot of the novel that is Star Trek but quite a bit that feels out of the place given what we understood the Federation to be at the time of the original series. In that respect I always felt like I was reading a scifi book that just happened to have the original series Trek characters within but that aside it's fine but maybe not what you would be expecting. Perhaps in the early days of the Pocket Books there was room for far more variety and interpretation after continuity be damned in Trek publishing:)
The story concerns a politically inspired terrorist attack on the world of Centaurus and an already damaged Enterprise being forced to intercede, complications rise when they discover the planets automated defence system is attacking any ships that approach leading to the the destruction of medical ships which reached the planet before Enterprise. This novel if I recall was my first introduction to Joanna McCoy and I quite like her character and how it shaped the "Bones" backstory and the return of Samuel T. Cogley was most welcome. Overall though the novel doesn't really delve into the complexity of what would drive a political splinter group to using WMD's nor the culture that gave birth to them, seemed out of place but again not if this was a non-Trek novel. Alas you will always be scratching your head a little over the events that occur but if you can let them slide it's not a bad read at all.

View all my reviews
Posted by Jarrak at 11:42 No comments:

Mindshadow by J.M. Dillard
My rating: 3 of 5 stars

The Enterprise comes to the aid of the planet Aritani and it's people who have turned their back on technology and love a more pastoral life. Raiders have been destroying crops and slaughtering people yet taking nothing, scans indicate vast mineral deposits which could be the motive for the attacks. Spock receives extensive brain injuries after going on a late night recon and has to return to Vulcan and even when planetary shields are created to prevent cloaked ships from entering the atmosphere the attacks continue...
Mindshadow wasn't a bad story at all, while the book is essentially a Spock story it also explores the moral and ethical dilemma of interfering with a culture and the complications of the existing dynamic and the value of said planet. We got some good McCoy in the novel as well and it's not the first time the Doctor has been smitten by a younger woman and Scotty gets some good coverage as well, I also liked Lieutenant Ingrit Tomson the security chief who goes on to appear in other novels.

View all my reviews
Posted by Jarrak at 09:17 No comments: