The Siege (Part 3)
The battle for Atlantis continues with the first round won thanks to the nuclear option and the
arrival of the Daedalus which then takes the fight to another incoming Wraith Fleet. Lt Ford is
under the influence of the Wraith hormone and and a wild and risky gambit is taken to save the day. 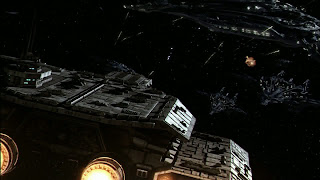 The Intruder
On route back to Atlantis mysterious accidents and deaths occur leading to the discovery of an
insidious stowaway on board the Daedalus. McKay and Hermoid are on the case, humour ensues:)
It's not the first time this plot has been used in the franchise but it's done well and the characters
involved work well together, the use of flashbacks also adds a lot of weight to the story.

Runner
Finding evidence of Lt Ford's handy work on another world Sheppard and Teyla are captured by
Ronon Dex a "runner" released by the Wraith for their sporting pleasure.
With little trust between them and Ford and pretty much everyone else it's all treading on egg
shells and then the Wraith arrive.
An excellent episode full of action and humour and a good story to introduce Ronon (Jason Momoa).

Duet
Now this is an out and out funny episode.
McKay and Cadman (Jaime Ray Newman) are zapped up by a Dart which is then shot down.
Zelenka retrieves one of the patterns which turns out to be McKay but Cadman's
spirit/soul/personality is now sharing his brain and body.
An absolutely brilliant episode with Claire Rankin as McKay's love interest:) 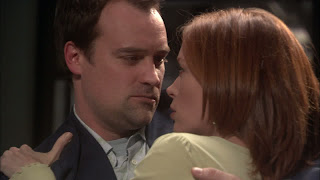 Condemned
A world with high technology has the potential to be a good trading partner despite their use of
prisoners to sacrifice to the Wraith a tradition that has been going on for centuries. Trapped on
this prison Island where the Stargate is positioned the team has to battle the inhabitants unaware
that they are on the menu for the local Wraith commander.
The story required a lot of leeway from the viewer but it didn't turn out to bad. 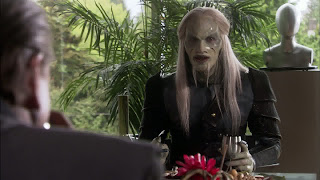