Be All My Sins Remember'd
The gangs all here and equipped with Asgard beam weaponry which proves highly effective
against Replicator ships. In a surprising move the Replicators retreat forcing a change of tactics
and a larger alliance to lay siege to their homeworld.
Michelle Morgan plays Fran the replicator in this uber CGI fest. 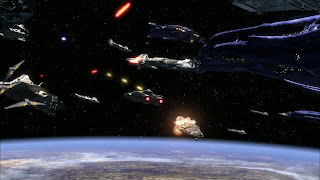 Spoils of War
A deserted Hive ship is found after tracking Todd's transponder.
The team eventually track him to a secret Wraith facility which is being used to clone a huge
army of new Wraith with the ZPM's and Todd's knowledge.

Quarantine
Once again the city locks everything down under a contamination threat leaving a number of people
trapped and dealing with various relationship issues and then the self destruct countdown begins.

Harmony
Sheppard and McKay agree to provide protection for a princess threatened by disloyal elements
in the court and aided by an outside power. Fun and games with the stroppy young woman.
Jodelle Ferland plays Harmony. 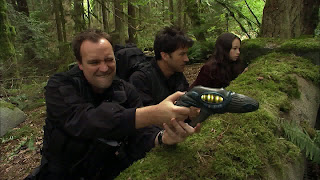 Outcast
Sheppard returns to Earth to attend the funeral of his father and Ronon tags along but as you
would  expect there is always something that will complicate matters. This time the nano-tech
experiments on Earth have created a rogue replicator lifeform.
Kari Wuhrer guest stars as Nancy Sheppard and Emma Lahana plays Ava Dixon. 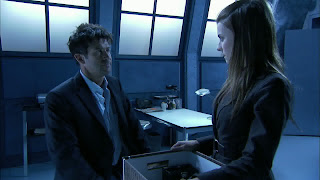