Tabula Rasa
A virus quickly spreads thoughout the city with every one except Teyla and Ronon losing their
memories. McKay awakes tied to a desk in front of his tablet which has a press me sticker on it.
Armed with only the instructions to find Teyla he sets out to save the city.
A nicely shot episode with the lighting of the flashbacks scenes adding a lot. 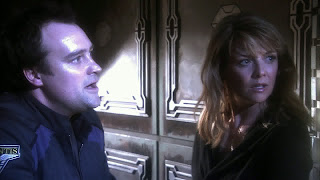 Missing
Teyla and Dr Keller pay a visit to the new Athosian world but find the community deserted and
in the distance the hunting horns of a race called the Bol Aki. A well written and acted episode
for Rachell and Jewel but not one of my favourites.
Danny Trejo guest stars as the Bol Aki leader.

The Seer
Davos a "seer" is consulted about the missing Athosians but he also provides information to a
sceptical McKay accurate enough to dispell any doubts.
Due to ill health Davos is taken to Atlantis where once more a deal between the Wraith
(namely Todd) and Atlantis is being considered to combat the Replicators and Carter is given
the vision of Atlantis and the Hive being destroyed. Martin Jarvis guest stars.
What started off as a pretty "meh" episode rapidly became an excellent story. 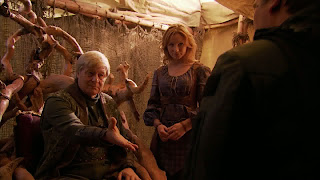 Miller's Crossing
Jeannie Miller is kidnapped after communicating with McKay, he rushes back to Earth only to be
kidnapped himself by an industrialist desperate to save his daughter using the nanite technology.
Any reason to have Kate back is a good reason.

This Mortal Coil
A drone crashes into the city and then later self destructs. Sheppard begins to suspect something
although what exactly is a mystery to himself but digging deeper he begins to suspect Replicator
infiltration. The prophecy given by Davos is then fufilled. 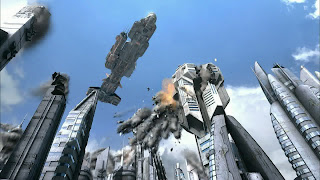 I miss Stargate. OK, I miss science fiction on TV ... set in space.

Yup, it seems that particular branch of the genre is pretty much dead on broadcast TV. What works well for 2 hours in a cinema doesn't over 12 - 24 eps on telly.