The Real World
Weir is back on earth and in a mential facility having to deal with her breakdown
and belief she has spent the last couple of years in another galaxy.
Not my favourite style of story but it did have Richard Dean Anderson and
Alan Ruck so not all bad.

Common Ground
John is captures by Koyla and while John is imprisoned he's fed upon by a Wraith but
over time an unlikely alliance is formed by the two enemies.
Christopher Heyerdahl guest stars. 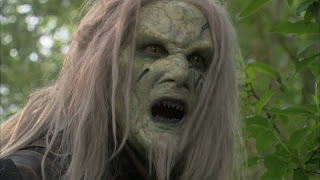 McKay and Mrs. Miller
It's all in the family as Mckay gets a visit from his sister and collaborate
on an energy generation experiment with unexpected results.
Amanada Tapping and Kate Hewlett guest star. 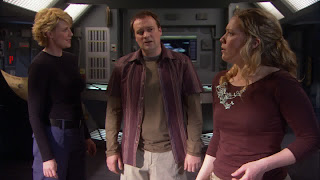 Phantoms
The bodies of long dead Genii are found on a world where a Atlantis team has
gone missing, they do turn up but seem unable to recognise Sheppard and company.
Soon everyone starts to see people and things are not there and then it's fight
for survival.

The Return, Part 1
The intergalactic gate bridge is being tested and in the depths of space a ship
travelling near light speed is discovered. The crew of the ship then evict the
pesky humans from Atlantis which then comes under attack from the replicators.
Now this is a thrill a minute episode and comes complete with Richard Dean Anderson
and Robert Picardo, what's more it's a two parter:) 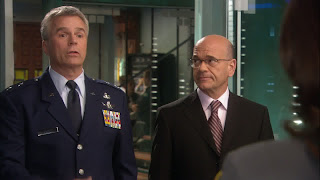