Bounty
Archer is captured by a Tellarite bounty hunter and has to make his escape
before being handed back to the Klingons. Meanwhile T'Pol is going though
Pon Farr brought on by a contagion and she is locked in decon with Phlox,
gel and hormones ahoy.
I'm not totally happy with a Vulcan female going through Pon Farr and the
gel/decon scenes tend to be a little cringe worthy, nice bounty hunter story
but embarrassingly bad how easily Archer was taken. 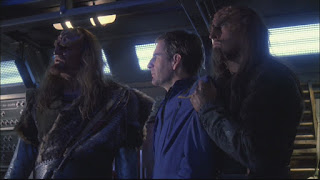 The Expanse
A surprise attack on the Earth leaves millions dead and the temporal cold
war really impacts on this part of the galaxy, Enterprise heads towards an
area of space known as the Expanse normally avoided by space faring
races but that is where the instigators of the attack reside. The Klingons
throw a wrench into the plans as Durass is keen to regain his honour.
An excellent season finale, the Klingon arc has been nicely handled and the
temporal war is now serious. I can't help but think the gouge in the Earth would
have been more fitting in Iowa or the Enterprise (2009) built in Florida. 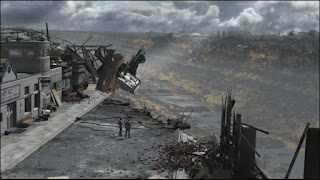 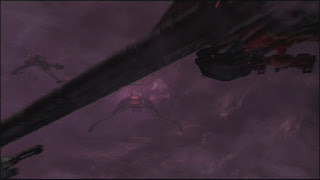 Season 2 wasn't really a step up for the series, it wasn't a backwards step either but
maybe feels less than because you expect more from the second year. That said a
lot of the groundwork has now been laid down which allows the uber arc driven
third season to grow as there is less time for one off character/action pieces.
A nice bunch of extras on the final disk especially the interview with Jolene and Levar.
Roll on the Xindi.