A Night in Sickbay
Porthos once again proves how ridiculous it is to take a dog on an extended space mission
especially one where first contact with new species is certainly on the cards. So the little
beagle does what most dogs do and whizzes on a sacred tree and the Kreetassans demand
an official apology to their exacting standards. Complications arise when the dog gets ill
and is on deaths door giving us the main story as Archer hovers around sickbay as Porthos
is treated.
This isn't a bad episode despite what it sounds like mainly because it feature Phlox and we
get a lot of character interaction, surprisingly it was the highest rated audience wise episode
from the second season. 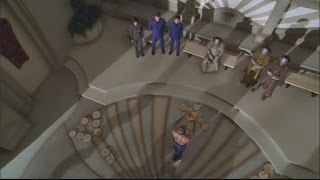 Marauders
The Enterprise visits a private mining colony to trade for deuterium but it seems a rogue
Klingon ship has been extorting the miners with pleasant threats leaving them just enough
low grade mineral to survive the upcoming winter.
Archer convinces the miners to make a stand with help from the crew and they face down
the Klingon landing party. A simply tale oft told in many a western and scifi series but done
with a little flair, a nice location setup and T'Pol looked well pleasant in the white outfit and
kicked ass, some good Klingon makeup as well. 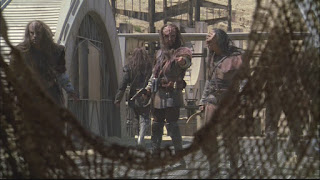 The Seventh
T'Pol receives word from the High Command about the location of a fugitive she failed to
apprehend when she worked in security, asking Archer for help goes against her orders but
trust is being developed between the pair and it pays when she is faced with the consequences
of her former and current actions.
I didn't really like this episode too much, again it relies on a Vulcan society that never quite felt
right in Enterprise, it was however good to see deeper interaction between T'Pol and Archer.
Bruce Davison played the fugitive Menos. 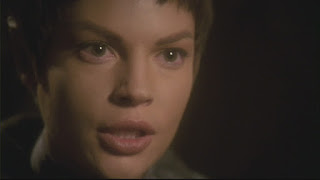 The Communicator
I hate episodes the rely on supposedly intelligent and competent people doing something stupid.
In this case Reed mr methodical leaves a communicator on an alien world and then both he and
Archer are captured by the natives when they return with more technology to find the device.
This story in TOS worked because I was a lot younger and well television back then just wasn't
expected to have serious depth, modern TV should match the sensibilities of it's audience.
It also underlines the issues with trying to maintain canon in terms of TOS, a large communications
device is simply daft given the state of technology on Earth at that time.
The rescue attempt was reasonable though even though perhaps too easy given the phase pistols
were really no better than projectile weapons in terms of use and accuracy. 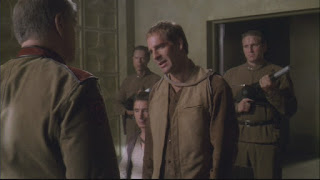