Canamar
Archer and Trip are taken prisoner accused of smuggling and how that all
came about is skipped (time and budget I guess). We see them on a prison
transport and getting in the middle of an escape attempt which forces them
to play along and hope the Enterprise catch up with them before it's
too late. A decent episode but how many times are members of the crew gonna
get into trouble before they sort some procedures out before going where
they shouldn't or limiting off ship travel to non-critical personnel. 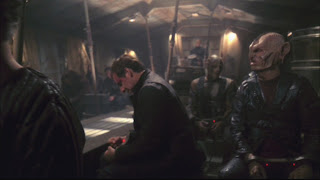 The Crossing
A huge alien ship swallows the Enterprise whole and the alien crew beings
of energy possess various members of the crew to experience what it's like
to be corporeal but there are sinister motivations in play.
A decent first contact type episode with very different aliens yet with similar
goals to other "bad guys", I thought in the end they were rather easy to defeat
but Enterprise really didn't go for whole sale carnage early in it's run. 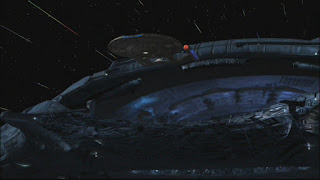 Judgement
Archer is taken before a Klingon court to answer charges of aiding enemies
of the empire a crime he is guilty of but Klingon justice is not exactly known
for it's belief in mitigating circumstances.
I thought it was a bit of a cop out not to show how Archer was captured but
that aside the set design was excellent (based on the movie set) and the
performances from everyone involved was top notch.
High praise towards the actors who played the Klingons..
J.G. Hertzler, John Vickery, Granville Van Dusen and Daniel Riordan. 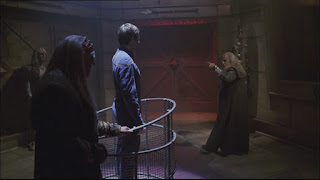 Horizon
Mayweather returns for a visit to his families cargo ship to find that his father
who he knew was ill had passed weeks before, the return is bitter sweet and
his brother who now commands is not happy when Mayweather starts interfering
with the ships systems without asking permission.
This was a bit of a bland episode, Mayweather suffered thanks to little development
despite getting some decent screentime, the simplistic story didn't help. 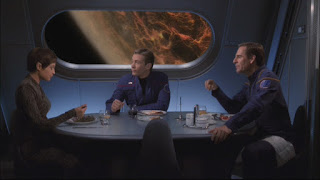