Dear Doctor
A Phlox ( John Billingsley ) centric episode and why not because Trek has never failed to
provide Doctors who are both interesting and popular. In this episode the over view is
Phlox writing a letter to a human friend who is back on Denobula in the same inter-species
medical programme. The writers also throw in an early case of how a prime directive
would be useful as an alien race destined to die out can be sustained but in turn that would
hamper the development of a second intelligent species on the same planet.
This episode also features Kellie Waymire, she passed not long after aged 36 from a
long term heart problem. 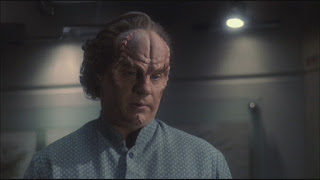 Shadows of P'Jem
Another world another first contact which goes poof when the shuttle is shot down
and Archer and T'Pol are captured by opponents to the current government which
is supported by the Vulcan high command. Held for ransom the Vulcans interpose
themselves but things get really complicated when the Andorians led by Shran
rescue them and then all hell breaks out and T'Pol is seriously wounded.
Fantastic to see the Andorians once again and the conflict between them and the
Vulcans is one of the high points of the first season, fun to see Archer and T'Pol
handling captivity. 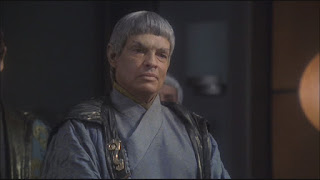 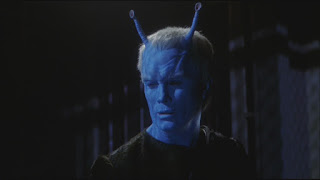 Sleeping Dogs
A Klingon ship is discovered in a gas giant deep in the atmosphere, a shuttle is
sent down in an attempt to rescue the occupants whose weak life signs are being
detected. There is however one active survivor who slaps down Reed and escapes
in the shuttle and then has to be convinced by Archer they did not attack the ship
and have no designs on the technology.
Once again the writers are doing well re-introducing a canon species into the first
season, they really should have concentrated more on the core species. 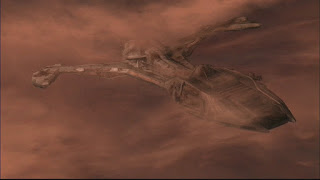 Shuttlepod One
Trip and Reed are running tests on a pod and they discover wreckage in an asteroid
field some of it belonging to the Enterprise. Faced with limited resources and no way
to contact Starfleet it looks bleak and while Trip keeps busy trying to repair the
shuttle systems Malcolm decides to record farewells to his former girlfriends to such an
extent Trip could very well kill him before they run out of air.
The fun really starts when they open the bottle of booze and get drunk, hilarity ensues
and for a bottle episode it works just so well. 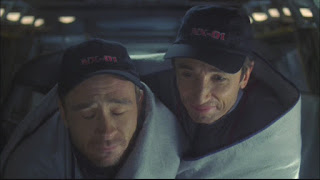 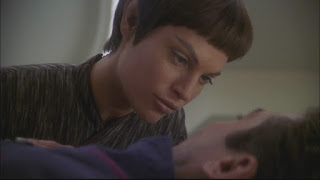