Rising (Parts 1 & 2)
The discoveries made at the Artic facility lead the SGC to identify the location the Ancients
travelled to from Earth and with a Gate address an expedition is formed for what could be a
one way mission.
On arrival a desperate need for an energy source has them gating to a planet where they meet
the native peoples and by bad luck or carelessness wake a Wraith Queen and her Hive.
An excellent series premiere with a solid guest performance from Robert Patrick and a story
that got into it's stride very quickly and set up the "world" we will be sharing with them. 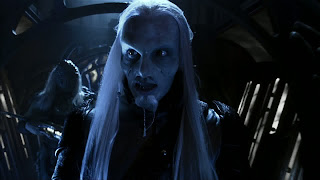 Hide & Seek
McKay under goes the Gene therapy to allow him to use Ancient tech and in what sets the tone
for his adventures it doesn't quite go according to plan and more complications arise with an
intruder in the city.
A weak episode but I guess they are still finding their feet.

Thirty Eight Minutes
A puddle jumper gets stuck in an active gate, with only 38 minutes before the gate shuts down
and chops the jumper in half decisions and sacrifices have to be made. Complicating matters
is the issue with Sheppard who has an alien "bug" embedded around his neck slowly killing him.
A classic genre trope with a definitive timeframe to solve a problem, always works well.

Suspicion
The Wraith continue to appear as if by magic on worlds the team visits. Suspicion falls on Telya's
people and they are restricted in their movements causing upset and conflict.
Sheppard discovers the mainland and the Wraith get a nasty surprise.

The series kicked off very strong, Rising is a top notch pilot although drawing on events
from SG1 certainly helps matters. The next three episodes did not reach the same level
but they do  have to handle the world setup and that's tricky to do whilst maintaining a
solid arc narrative so they get some leeway from me:)
I also got chills when the theme kicked in, excellent piece of music and hadn't heard it
since the series finale nearly 3 years ago. 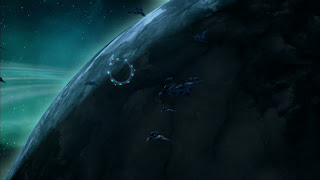