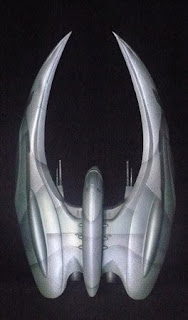 It's been long promised but now it's here, the film prop level model of the Raiders from Battlestar are now being offered for sale, you can find details and more pictures here. I personally would love to own one but I can't really find $950 on my current earnings nor dip into the savings which may be needed when the economy goes into full recession.
Posted by Jarrak at 11:28 No comments:

Totally enjoyed watching Pushing Daises in HD, looked beautiful as it's style really was suited to the in yer face aspect of HD with the CGI and colour schemes used. Started watching Eli Stone, even better the second time around, still not watched Smallville. Pre-ordered Iron Man on Blu-ray from Amazon, priced was reasonable, actually dropped a couple of pounds from the original price.

Terry Pratchett's latest "Nation" is next on my reading list, it is not a Discworld novel, unusual but what the hell:)
Posted by Jarrak at 23:33 No comments:

Just watched the first 3 episodes of the series on Blu-ray, fantastic quality although not much on the extras front. Films We Like is the new podcast from Scott and Anthony formerly Scifi&Fantasty Podcast which fell by the wayside due to real world complications.
The DVD of Eli Stone arrived as well and I still haven't watched Smallville season7 Blu-ray yet, too little time.

Iron Man is due on Blu-ray very soon (some shipping already) but I find myself questioning the value of the movies, the A list even some I consider B list releases are vastly overpriced and it's always the same movies in the 2 for 1 or 3 for 2 deals.

Merlin the new BBC series starts tonight, not expecting too much after the joke that was Robin Hood but you never know. Yet again a major BBC series not offered in HD!
Posted by Jarrak at 12:11 No comments:

Tinman on Blu-ray arrived today, a solid mini-series which thanks to HD go onto my shopping list. The DVD of ELi Stone is crossing the atlantic and Pushing Daises on Blu is close behind, not sure where I'll find the time to watch them though.
Started the new term at the adult education centre, doing a ECDL course, pretty much the same as CLAIT+ but some different approaches to the applications, not sure if I'll benefit but I quite enjoy the learning experience.
Posted by Jarrak at 22:23 No comments:

Cavalcade of Cartoon Comedy and other bits.

It's pretty rare that I get that yucky felling when watching TV or at least the type of TV I watch but a couple of programmes this week had be squirming.
First off Profit where Jim gets frenched by a woman who he then calls "mom", if you haven't seen this short lived FOX show from way back I would highly recommend it. The second was a TV movie called Boa v's Python where a giant snake went down on a woman in the back seat of a car after it eat her fella who was previously doing the same, that was bizarre.

Seth MacFarlane has some new animated comedy at his Cavalcade of Cartoon Comedy.

The soundtrack to Dr Horrible has been released, currently on itunes including outside the US.
Posted by Jarrak at 16:58 No comments:

The Blu-ray version of Smallville season 7 arrived today from Movietyme.
Season 8 returns to US screens on the 18th of this month, just enough time to watch the boxset at my leisure and get ready for what looks like being a very different final season.
Posted by Jarrak at 22:22 No comments:

Legend Of The Seeker

Legend Of The Seeker is a TV adaptation of Wizard's First Rule a novel by Terry Goodkind.
The series premieres on 1st November in the US on Disney I believe although the series is intended for syndication.
Posted by Jarrak at 20:48 No comments: