Earth's Final Hours premiered on the US Syfy channel on the 17th of December
with I have to say some positive expectations as it's still rather rare to
find a movie in this genre/market with what amounts to a rather good cast.
Robert Knepper is a mainstream TV/Movie actor with scifi chops having recently
done The Day the Earth Stood Still and Stargate Universe and Julia Benson
a regular in Canadian scifi productions has a recurring role in SGU.
The movie has a reported budget of $1.8 million which is respectable
for a movie in this genre and market and it's all on the screen, I doubt a cent
was wasted. 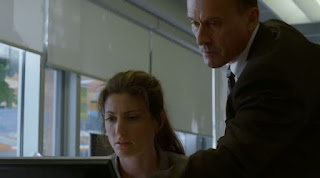 Earth's Final Hours has a fairly generic base plot, the planet suffers an event
often man made but this time totally not of our making, normally we have very clever
and rather arrogant scientists doing something silly with the fabric of scientific law
and then are surprised when it all goes to hell. In this case a celestial event
influences the rotation of the Earth with the final result being a locked world with
one half red hot and the other ice cold with a small "green" band in between that
could be viable.
A federal agency then looks to cover up the impending doom while searching out the
technology in an attempt to fix the failing magnetic field which will then protect
the last life within this green zone.
Complications arise when a group of scientists, agents and friends/family are trying
to save the whole planet using this same technology so the race is on.
Ultimately we have the good guys racing the bad guys to achieve a goal which in this
case has you scratching your head as to why there is a problem but again you've got to give
the plot some leeway and go with the characters and the circumstances they find themselves in.
If you end up rooting for the good guys then the writer/director have done their job even more
so if you cheer the demise of the bad guys and in this case the movie does deliver. 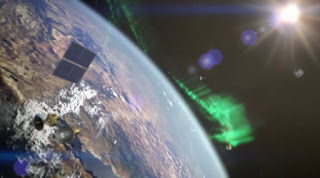 Ok lets look at some of the plot issues.
While the existence of a White Hole has yet to be proved I guess it's
not totally outlandish.
However while the cause of the planets problem can be accepted I found
the result rather perplexing, not quite sure how being hit by hyper dense
fast moving matter would affect our magnetic field enough to cause it's
failure and reduce the rotation of the planet but few scifi movies survive
scientific examination so lets not go there.
Why the original project was shelved and one of the lead scientists forced
into hiding and  the other under lock and key was harder to explain.
They went with the militarisation of the technology but it's ridiculous to
think only two people were involved with the project or the theory behind
White Holes and the threat was never published. Of course if the whole
world don't notice or it has no impact on events in the movie as the Earth's
rotation slows then you have to accept almost anything.
What is also perplexing is that the use of this satellite based technology had
yet to be proved to the point where it could kick start the magnetic field and
protect just a strip of land circling the globe.
In reality the goal of Streich and Edwards (Kneeper and Benson) was just as valid
and had the benefit of saving the whole world rather than a small part yet it
seemed one maybe two agents were deciding the fate of 6 billion people just in
the hopes of saving the current US political system and the rich and powerful.
I have a fundamental issue with the whole save the government idea during a global
disaster, politicians are needed to support a society, you can not have a society
based on an unproductive group thus the dice should have been rolled on
saving the planet not the current administration.
I guess that's one of the beauties of the disaster "b" movie plots, they don't
always make good sense but they do set up the conflict required to generate
good guys and bad guys.

Production Thoughts.
Right from the word go this movie looked good, the cinematography was excellent
with some beautiful location shooting and good solid CGI both of which can eat
up money if the producer/director is not careful. There were a couple of shots/scenes
that obviously needed another month and a few thousand dollars investment but
I've said the same whilst watching a $200 mill movie. The acting was overall very good,
Robert Knepper pretty much always brings his A game he's just the sort of actor but
it was a delight to see Julia Benson getting a meaty role, we never did get enough of
her on SGU. Supporting roles from Bruce Davison, Michael Kopsa and Roark Critchlow
all added weight to the story as all three are solid working actors and even the
younger cast members Cameron Bright and Julia Maxwell were ok portraying the more
unlikely characters. All in all an excellent cast which made the most of the script
and there were no obvious unbelievable characters or poor acting, everything worked. 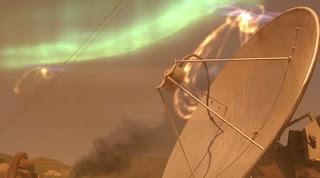 I can highly recommend this movie, it's not going to appeal to some people who will never accept any
flaw in a plot or those who are not into the disaster flicks but for the rest of us Earth's Final Hours
stands head and shoulders above the majority of movies aimed at the same market both paid for by
Syfy or from one of the many independent producers.