Trinity
The discovery of a dead world surrounded by the wrecks of Wraith Hive ships leads to the
discovery of a powerful weapon powered by an advanced Ancient energy generation system.
Mckay gets the go ahead to continue the experiment and his arrogance leads him into doing
something stupid. A "b" plot follows Teyla and Ronon on a trading mission which is used to
explore some of his backstory.
An excellent episode highlighting the weak elements of some of our main characters. 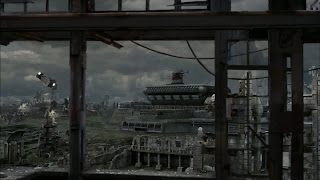 Instinct
A low tech world and people are terrorised by what seems to be a Wraith which survived a crash
a decade previously. Offering their help the team enter the woods and find a young Wraith female
too young to have been part of the massacre ten years ago and her existence revels more about the
world and the people.
A nice episode, touching in some respects and Jewel Staite first appearance on SGA.

Conversion
Sheppards injury from the previous episode flares up and slowly his DNA is rewritten with elements
of the Iratus bug. A risky medical procedure is undertaken by Carson with the prime ingredients only
being found on the Iratus homeworld and so the mission is on to find and claim the
necessary components.

Aurora
With long range sensors back on line a long missing Ancient warship is identified in deep space.
The Daedalus is sent to rendezvous but the ship is dead and the crew in long term cryo-storage but
their brains are active and interfaced with the ship which allows them to "live" in a artificial reality.
This is a cracking episode, the Aurora is not a pretty ship but the interior is clean and sharp
befitting the Ancients and what a great idea to have the crew not aware of what had happended
these last 10,000 years.
Pascale Hutton (Sanctuary) plays First Officer Trebal, looks great in a uniform:) 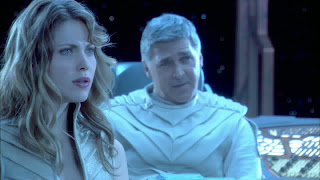 The Lost Boys
The team are ambushed by Ford and his men all juiced up on the Wraith enzyme. Desperate to
convince them that the drug is nothing but a positive they are exposed and then the plan to attack
a Hive ship is revealed, first of a two part story.
Welcome back Ford who has got far more interesting since he went "dark" and a good story
for his character.