A Savage War Of Peace by Christopher Nuttall

A Savage War Of Peace by Christopher Nuttall
My rating: 5 of 5 stars

A Savage War of Peace continues the story of the planet Vesy and it's indigenous population who are being caught between some of the major powers of Earth along with fringe elements who claim to know what is best for this species. Britain left a presence on the world before the Warspite returned to Earth and that camp soon becomes overwhelmed with the influx of ships and people many of who have no real interest in allowing the British forces to dictate terms of occupancy. The Indian fleet establishes their own base and opens negotiations directly with other city states and the almost inevitable sequence of events is kicked off as this culture is destabilized even more so than before when only Russian deserters were in system.
This second novel of the second "Ark Royal" trilogy was for me more interesting than the first even though it's light on space based action but the events on the ground and diplomatic maneuvering more than makes up. The interesting thing is that at this point there is no real "bad guy" although reading the British forces as the "heroes" of the story means you should take the Indian forces as the protagonists but they do nothing that anyone else wouldn't do and have done and with some style it has to be said. I am looking forward to the conclusion to this story in the third novel "A Small Colonial War" not just for the expected action but for the final steps of the characters that I've been following during the events in and around Vesy.

View all my reviews
Posted by Jarrak at 12:41 No comments:

Email ThisBlogThis!Share to TwitterShare to FacebookShare to Pinterest
Labels: A Savage War Of Peace, Christopher Nuttall

Warship by Joshua Dalzelle
My rating: 4 of 5 stars

I got my copy of Warship for free after signing up to Discover Scifi, while I've read other novels from Joshua the Black Fleet series wasn't an immediate attention grabber. However I wasn't going to turn the offer down since I do enjoy his writing so I jumped right into this world that he created to tell the story of Captain Jackson Wolfe an Earth born native who commands the Raptor class destroyer "Blue Jacket" part of the Centcom Black Fleet. Far into the future mankind has discovered FTL and colonised numerous worlds mostly along racial and political lines and conflict amongst them has been non-existent. While it's true the various factions of humanity may not overly like eachother they are bound by economics and a surprisingly well thought out political and military structure. The Black Fleet is at the bottom rung of the military ladder, old ships and questionable crews but for this cruise Captain Wolfe has been ordered out to the frontier to investigation some curious events, what he finds changes everything.
I took me a while to get into the story although I have found myself enjoying the more "realistic" physics in military scifi where FTL is not simply a button press away and sublight in system is not a matter of minutes but days. I did eventually get into the swing of things and while most of the characters are not that endearing the interaction and events that play out on the ship were interesting even before the discovery of the destroyed colonies. Once we get to that point then the novel changes gear and everything ramps up and I found myself turning the last page and going straight to the store to buy book two in the series.

View all my reviews page and going straight to the store to buy book two in the series.
Posted by Jarrak at 09:46 No comments:

Warspite by Christopher Nuttall
My rating: 4 of 5 stars

The first interstellar war is over, many of the space faring nations of Earth and still licking their wounds and after the devastation the need to move humanity out into the stars is compelling. While human treaties exist to protect the solar systems infrastructure the star systems and colonies beyond the tramlines leading away from Sol are far less protected. The great powers have an understanding but nation states sidelined for decades who survived the war relatively intact are flexing their muscles and the newly discovered planet and it's alien population will become the powder keg.
Warspite is a change of pace from the original Ark Royal trilogy, with less conflict and more diplomatic and political issues the story seems a little slow paced but that's not a bad thing. Without giving too much away we can see that there will be trouble ahead for many of the characters we first met in the original trilogy as the demands of Britain, Earth, Humanity and this new species conflict.
A solid start to the new series but it may be a little jolt in style and substance if you are fresh from the Ark Royal series while I had a good gap between them and that allowed me to embrace the changes without any negativity.

View all my reviews
Posted by Jarrak at 10:54 No comments:

Picked this up the other day, having room on the shelves is proving to be expensive but the Canadian livery really caught my eye :) 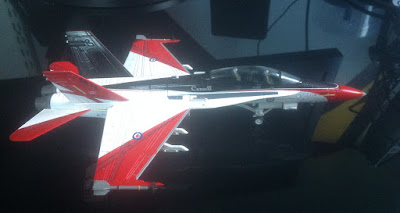 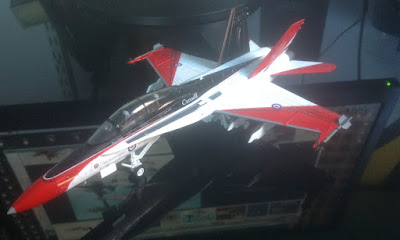 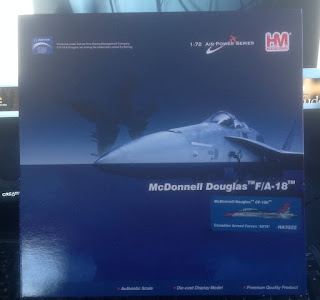 The Furies by Jo Graham

Stargate Atlantis: The Furies by Jo Graham
My rating: 5 of 5 stars

The threat of Queen Death escalates not only to every human in Pegasus but also to the factions of Wraith who she is alienating thanks to her scorched earth policy and together they face a stark truth. There is no help or salvation but from themselves and they all know in their hearts that the current dynamic within Pegasus has been shattered forever, for Pegasus to survive will take not only a military alliance but a fundamental shift in attitudes from everyone. This is the situation which has Teyla once again embracing the part of her which is Wraith and taking her place as a Queen for only a Queen can influence and manipulate the events in the direction which could mean a future for all.
The Furies by Jo Graham once again gives its all to lovers of Stargate Atlantis while enhancing and massaging the established canon from the tv series, some may see this as a bad thing but Legacy has to evolve the characters, it would have happened on the tv show and maybe in a similar direction. I still adore diving deep into the Wraith culture and the introduction of Waterlight was beautiful as is how the Wraith see the humans. The overlay of their worldview on the Atlantis command structure and personnel is inspired and makes so much sense and as is often the case it's the lack of understanding and insight which blocks potential solutions from being seen.
With the revelations and events in The Furies we can only look forward to their consequences in the next Legacy novel "Secrets", can't wait.

View all my reviews
Posted by Jarrak at 10:17 No comments:

Sir Apropos of Nothing

Sir Apropos of Nothing by Peter David
My rating: 5 of 5 stars

Sir Apropos of Nothing was not a book I went looking for although as a Trek novel fan I do tend to look at the other work of its authors and follow them on social media. This was how I first became aware of Sir Apropos of Nothing and decided to give it a go and boy was that a great decision.
The story takes the usual tropes of a low born young man who through force of will, effort, coincidence and plain good luck raises through the ranks of the society he lives in. The main difference here is that you really have to decide if Apropos is a good guy or not, he's certainly a broken individual (his physical limitations, birthing and status made sure of that) but he tends to keep doing the right thing for maybe all the wrong reasons. You see his mother believed in destiny and it's hard to argue after she witnesses the death and birth of a Phoenix and while she herself has a hard life never doubt that everything she did was to give her son every chance, of course Apropos only really really understands that long after she has passed on. Never fear though, the loss of his mother spurred him into his grand adventure dealing with Kings, Queens, Knights and oh yes the very opinionated and arrogant princess who may just more crazy and dangerous than everyone else combined.
After I finished Sir Apropos of Nothing I immediately went to buy the second and third novels in the series but alas they are not offered as ebooks and the prices for new copies of printed media were quite high. I have yet to decide if I can justify the cost but I would certainly love to read them and perhaps that is the best recommendation I can give:)

View all my reviews
Posted by Jarrak at 11:31 No comments:

Email ThisBlogThis!Share to TwitterShare to FacebookShare to Pinterest
Labels: Peter David, Sir Apropos of Nothing

SGA-18 Allegiance by Melissa Scott
My rating: 5 of 5 stars

Reviewing the Legacy series is tricky, I was fortunate I read it well after the fact but was totally unaware of the major plot points but I never went looking for reviews either.
So here we go, Allegiance is the third novel in the series and Rodney is still very much missing and unaware he is helping to bring down his friends and family in Pegasus and after the failure of the first retrieval mission things look bleak. Atlantis greets some old and new friends from Earth but before anyone can get settled the city is attacked by forces loyal to Queen Death, the city survives mainly intact for all but one critical element. However we also see that Sateda in a small way is rising from among the ashes of it's former civilisation offering hope to Ronon but there are always other worlds and groups looking to exploit the resources of worlds unable to protect themselves. It seems diplomacy will be the tool of the day to protect and nurture alliances within the humans of Pegasus but the consequences of the bargaining being done could be severe...
Allegiance is another fine addition to the Legacy series, Melissa and Amy have done a great job incorporating new and previously seen aspects of the Atlantis tv show into this series and maintained the pacing and entertainment value while holding true to the spirit.

View all my reviews
Posted by Jarrak at 11:05 No comments: 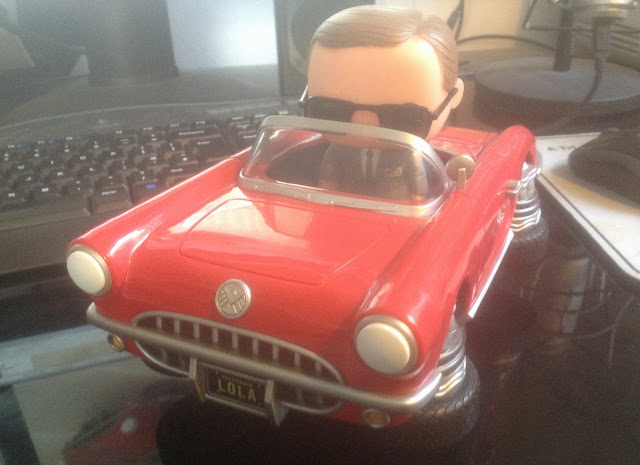 Now this I had on pre-order for a long time, it would be quicker to import but the cost was prohibitive but I got it the other week so all good :)
Posted by Jarrak at 11:04 No comments:

I had the third season of Vienna on pre-order from Big Finish for a few months and the CD package arrived the other day, they also provide direct access to the mp3 library of your purchases and a version formatted as an audiobook. Big Finish should be praised for both the gesture and the added convenience they provide to their customers.

Vienna are the audio adventures of the bounty hunter Vienna Salvatori voiced by Chase Masterson, well worth listening too and produced to a very high level. 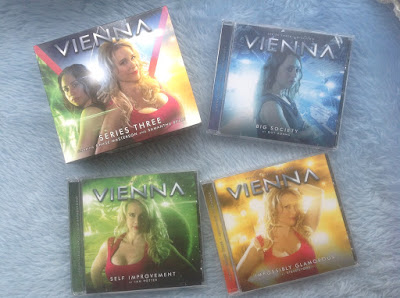 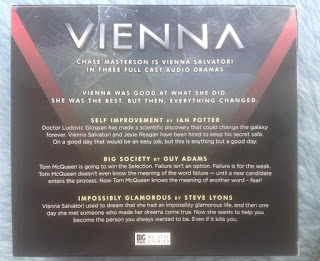