I got my Farscape Blu-ray boxset today and by co-incidence a half decent camera, the lack of quality in the photos is no longer down to dodgy hardware but the lack of skill on my part:)
I picked up the boxset for £57 from Amazon UK fully aware of the short comings of this release but I did the math and considered the price reasonable. 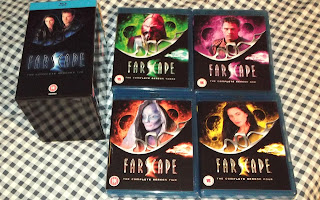 But what is the picture and sound quality actually like ?

I acquired a MKV of the pilot ripped from the Blu-ray which sold me on the idea of double dipping. The video is certainly superior to the original DVD release I own upscaled by my SONY PS3 and/or the Blu-ray player but it doesn't compare to the native HD Stargate Atlantis presentation. Audio is a 1.5Mbps DTS which sounds very nice not that the DD5.1 on the DVD was bad.
Ultimately as a double dip this has to be one for the fans and then perhaps only if you don't already have the Starburst DVD editions.