The Shrine
A mission goes awry and McKay gets infected with a parasite responsible for a degenerative
disease common to the people of the Pegasus galaxy, it is fatal but it is said  a shrine on one
world will reverse the effects for a single day.
Kate Hewlett guest stars as Jeannie Miller once again:) 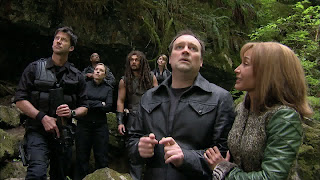 Whispers
Sheppard and McKay give support to the team led by Major Teldy who have found one of
Michaels old labs next to a deserted village. As night draws in a mist envelops the land bringing
the Whispers and a fight for survival.
Christina Cox, Nicole de Boer, Leela Savasta and Janina Gavankar guest star.
Bloody brilliant episode:) 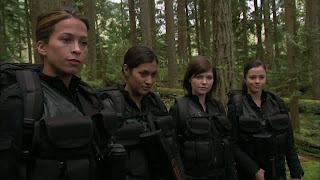 The Queen
Once more Todd and his Wraith are brought into a plan to use a gene therapy on
his people to convert them to eating solid food but to make this plan viable the most powerful
Hive Queen will have to be convinced. Without his own Queen it is upto Teyla with apporpriate
surgery to play this role. 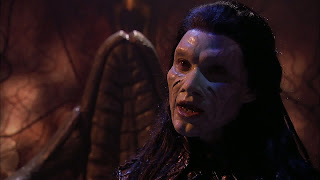 Tracker
Keller is kidnapped whilst on a medical mission, Ronon and Mckay go after her but it's one
of the Wraith Tracker victims who has her and is as experienced as Ronon in fighting and
evading his foes. Mike Dopud plays Kiryk, the actor returns with a recurring role in SGU.

First Contact
Daniel Jackson visits Atlantis looking for a hidden lab and together with McKay they discover
it and within hours a highly advanced alien race break into the city and steal a piece of technology
and take Daniel and Rodney as well.
Meanwhile the Deadalus has rendevoused with Todd's Hive in preperation for testing the drug
which could free the Wraith from feeding off life force.
A stunning mid-season cliffhanger, lots going on. 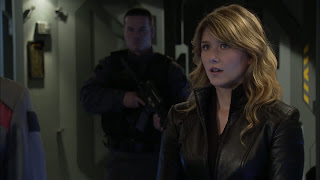