My Random Journey Through Trek #49

The shuttle pod after scanning one of the spheres in the expanse is tracked by a mysterious ship, soon after the same ship sends a distress call and the Enterprise offers to take the crew onboard as the alien vessel has lost life support. The crew of the ship give thanks to Archer and explain they are on a pilgrimage to one of the spheres, it seems they worship them as divine and while this proves a little awkward especially with T'Pol everything seems to be ok. Their leader D'Jamat approaches the captain and demands that they turn the Enterprise over to his people, an explosion then rocks the ship as one of the visitors triggers an organic explosive, threatened with the destruction of the ship Archer surrenders. It turns out that D'Jamat wants the ship so he can return to his homeworld of Triannon and use it's firepower to end a civil/religious war between two factions one who believes the Chosen Realm was created in nine days the other in ten days. 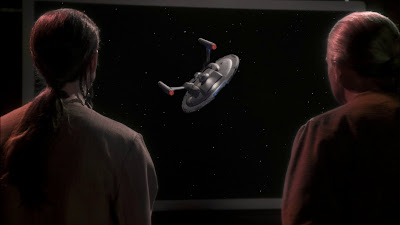 D'Jamat offers mercy to the crew of the Enterprise for the sacrilege they have committed by visiting the spheres and demands just a single death, Archer has to choose and in the mean time the database that contains all the information the Enterprise had collected gets wiped. Archer chooses himself to be executed and convinces them that the transporter is used for such requirements, T'Pol "executes" Archer who is now free to sabotage the ship. As a side note one of the women in the alien party approaches the Doctor about her pregnancy, a note of discourse is present in the group and Yarrick and Indava prove to be instrumental in undermining the hold D'Jamat has on the ship. The Enterprise is approached by four Triannon ships which are crewed by the opposing faction, a firefight breaks out and in the midst of this Archer puts his plan into motion. Phlox puts a compound into the ventilation system which will nullify the organic aspect of the explosives in the aliens bodies and Archer starts pulling plugs out of sockets. 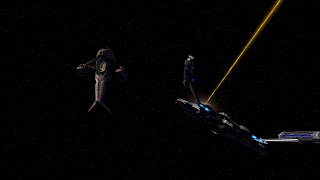 The ship is eventually retaken and Archer contacts the surviving two ships, together they return to Triannon to find the cities and population decimated, peace has been achieved as no one is left alive to argue.

First off I've never liked tv or movie plots where the antagonist is driven by dogma over reason, it's a little too easy to create a bad guy that way and it requires an awful lot of work to make said bad guy and his actions work in the framework of the whole. Chosen Realm is no exception, the source of the religious war between the two factions makes no sense at all unless it's within the realm of blind devotion to dogma. As for their overall faith raising the spheres as the work of deities that also takes some accepting, a warp capable science based world to be driven by this level of faith based existence makes little sense.
Ok then specifics, it's a pity the Enterprise sensors can not detect the alien ship which seems to have no active cloaking technology but gold star to Archer for ordering full security but a bit pointless if unknown aliens can sidestep scanning on religious grounds, that was sloppy. It's not long either before the science and faith start to butt heads, it's clear to the extreme that D'Jamat ( Conor O'Farrell ) has no time for reasoned debate and Archer at least moves the conversation onto other things. Alas by this time these unscanned aliens have had the free run of the ship including main engineering so when their plan is acted they catch security and the Maco's totally off guard. Archer and Reed really have to have a good chat but as we know in decades to come Starfleet continue to open their ships to one and all and suffer the consequences. So with a few button presses D'Jamat is able to wipe the database of all references to the Spheres, how the hell would he first learn how the system works and side step any security designed to prevent this sort of action. The question is raised once again how much access and instruction are the crew giving to these aliens and don't they believe in ancillary off site backup or hard copy for such critical data? Granted there are limits, if the central computer gets written off the likelyhood is that no amount of data would allow them to finish their mission but it was just too easily done and only there to let the plot continue. I would have liked to believe that D'Jamat respected Archer for volunteering to die but I think it was more the point he expected him to sacrifice a lesser member of his crew just as D'Jamat would have done, I doubt he would have sacrificed himself if there were others to do the sacrificing. Onto the fire fight, seriously the phasers hardly left a mark on the structure of the ship, I guess that's handy when you are shooting like crazy in and around the warp core but at least we had the Maco's front and center with what looked like much better or useful weapons. It's at this point we get perhaps my favourite moment of the episode as Archer over the coms twists the knife into D'Jamat who still believed he held the upper hand with his suicide bombers "Try to blow yourself up, I'll wait".
The episode wraps with the people's return to Triannon and we get the not so subtle message delivered with the proverbial sledgehammer, the planet is devastated thanks to the intolerance of it's people. I suspect the writers stayed away from condemning faith outright rather they targeted conflict within a faith which led to the extremes taken by at least one element, we really never found out what the other faction actually did over the century of conflict.

The Chosen Realm was not as hard to get through as I remembered but the character type as portrayed by D'Jamat always annoys me to the point where I actually put more stock in the blatant browbeating message as delivered by the original series "Let That Be Your Last Battlefield".

Great breakdown here Mike. Some of the points you make that detract from this episode are, in some ways, the very same that I feel toward "Enterprise" in general.

Sometimes I feel sorry for everyone involved with Enterprise, with such experience from within the franchise it should have been a winner from the get go.