My Random Journey Through Trek #47

Tom is once again spending time in the Holodeck tinkering with his latest project when he is called to duty when a mysterious vessels emerges close to Voyager. Tom identifies the malfunctioning drive system on the ship and offers a solution to contain the imminent explosion and saves the day. The pilot of the ship introduces himself as Steth and informs them he is a test pilot and pushed the ships as yet perfected engines beyond their limits. Tom asks Chakotay to assign him to the crew fixing the ship and despite some reservations with Tom's attitude he agrees. Steth and Tom get on great and it seems Steth is living the life that Tom really would want to, no ties to friends and family, go anywhere and fly anything but it's not all that it seems. Seth when unobserved is accessing Voyagers computers and his appearance seems to be fluctuating as confirmed by his own ships DNA scans. When the ship is fixed thanks to Tom and his idea of a carburetor to control the flow of energy to the engines "Seth" flies away leaving "Tom" to pine for his "friend" but "Tom" isn't acting quite himself. He seems unfamiliar with the layout of the ship, knows little of her close interpersonal relationships and his general attitude seems to be devil may care to the point of laying hands on both B'elanna and Seven.
Janeway confronts Tom about his recent actions and then a call for security prompts Tuvok to rush to the ready room where Tom is strangling his Captain, he is restrained and taken to sickbay where the doctor discovers from peculiarities which they think may explain Tom's strange behaviour. Meanwhile in some distant part of the quadrant the real Tom awakes in the body of Seth and finds himself under attack, a woman beams onboard demanding her body back and everything falls into place. Together they attempt to release the locks on the ship's systems and when it's done the two set off to find Voyager and get their own bodies back. They arrive and the Janeway imposter shoots Seven and steals a shuttle, gloating and she flies away confident they won't fire and risk killing her but Tom targets the newly installed carburetor and disables the ship. Tom and Janeway are returned to their own bodies along with the alien woman "Steth" leaving her former body inhabiting the identity thief. The two of them return to their own star system leaving Tom to make amends to B'elanna and the crew for his recent behaviour prior to not quite being in his own body. 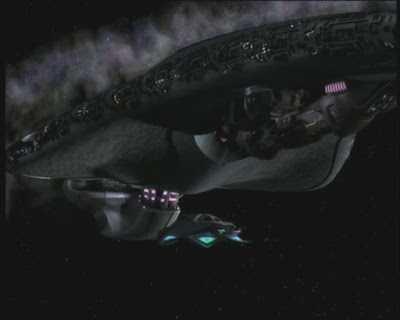 Vis À Vis was a fairly straight forward body swap episode which relied on Tom and his inherent wanderlust to make it work, to be fair it would not have worked if Tom had been more settled in the first place. One of the issues with dipping into shows in a random way is that you miss out on any character build up which would pay off in an episode like that but for now well Tom was a dick and luckily for Voyager so was the alien entity which was stealing other peoples bodies.

I still find it ridiculous anyone would spend serious time "fixing" an holographic vehicle let alone where all the energy overhead is green lit along with crew privileges, seems some of the crew get a lot more time recreating than others. That of course begs the question why Tom was called to the bridge when he was off duty, so the helm officers on the other two watches were incompetent? Miraculously it works out as Tom is able to identify a piece of blue sky technology, diagnose the problem and offer a solution based on classes in a theoretical subject, he was still a dick. We then get it plastered on with a shovel how unsatisfied Tom is with his current duties and relationships and how lax security is when a visitor roams the ship with no oversight and strangely enough Seven didn't seem to check the logs for what Seth was up to nor report it. Tom of course fixes this alien engine in the grand tradition of Starfleet engineers throughout time, hang on a minute Tom is a helm officer with a passing interest in ship design how the f*"k did he fix such a theoretical piece of technology!
Lucky for us he did and that's when Seth makes his move, he takes over Tom's body and sends him on his way then we get the out of place stranger whose weird behaviour gets little attention until he manhandles two of the female crew and Janeway confronts him. To be fair no way they could foresee what would happen but even when Tom finally turns up in Seth's body Janeway is still capable of throwing a smoke screen and flying away despite any restrictions onboard. On a side note, although we didn't see a great amount of detail the designs of the two large alien starships were really good, looked like a lot of work was done for a small payoff.
Anyhow back to Tom as he convinces Chakotay he is who he says he is and defeats the enhanced shuttle (not even going to ask how they built the coaxial drive on one of them) and hey presto we're all back to who we were apart from the female alien, not to worry she ain't important.

The best thing about Vis À Vis was Dan Butler who unfortunately for the actor will always be Bulldog from Frasier to me even under a layer of prosthetics:) Alas the story relied too much on convenient actions and reactions as well as leaps of plot for everything to work, it's watchable but not a good episode.