So I grew up watching the "classic" Battlestar Galactica, seemed like it was often on telly especially on a Sunday afternoon when the family spent the day visiting my grandmother, almost a tradition in regards to how some shows got so much airtime despite having a limited number of episodes. However I was young so I may be looking back at that era with very very cloudy memories after all there was BJ and the Bear, The Six Million Dollar Man, The Incredible Hulk and a little later Buck Rogers to contend with not to mention stalwarts like Star Trek, Time Tunnel and Voyage to the Bottom of the Sea.

Regardless the TV series and theatrical feature made an impression not only with the incredible special effects (For the time and budget) but also an epic story with from my young and inexperienced mind endless possibilities and wonders. I still have that bias towards flights of fancy but tempered with real world reality which is perhaps reflected amongst the scifi fanbase as a whole since we see more realism in characters and darker situations played out on tv and film.
So onto Battlestar Galactica which tells the tale of a human civilisation at war with an alien race of robots, the colonials as we come to know them interfered in a conflict between the robotic Cylons and another race and drew down their wrath. The ongoing war seems to have reached a stalemate and a peace treaty is close to being signed but a council member and architect of the plan has sold out the humans and the 12 Battlestars are led into a trap and one is known to escape intact. Faced with the lost of the 12 worlds the handful of survivors under the shadow of the Battlestar Galactica set sail across the galaxy towards an almost mythical 13th colony known as Earth but the Cylons are not far behind.
The story may not be exactly original and has it's roots in classic literature and it has religious overtones but it is compelling as the humans flee towards safety but come across worlds of humans lost to records and have to deal with attacks from the pursuing Cylons. All this set against a fleet with limited food, water and other supplies plus the issues raised within from military and political maneuvering which often leads to questions over the path the remnants of a great society are taking.
It would be easy to dismiss the classic Battlestar as just cheap and cheerful scifi which there was plenty of back in the day but all the elements are there to make a compelling and driven story of human survival on an individual and cultural level, the key is the real world social and economic realities which shape the way the story can be told, that is really the only difference between Glen A Larson's shows and Ronald D Moores. 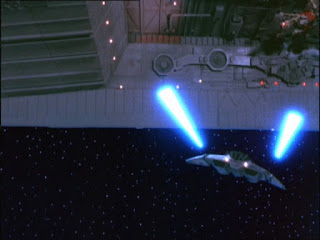 Saga of a Star World
There are a number of versions of this story, the theatrical release which made a pretty penny in cinemas around the world and probably covered the bulk of the cost of the series if not putting into the black but also TV and DVD versions both complete and chopped into three one hour episodes. I remember watching the movie at my local flea pit as a youngster and watching it on television but for now the UK region 2 DVD boxset is my source for the show and it's presented as a 143 minute feature in a 4:3 ratio with stereo and 5.1 audio options. The overall picture quality is pretty poor to be honest but the audio is fine and well you have to make allowances for older shows put onto DVD although at least this wasn't a product of the video age so the masters are film based which has led to the upcoming Blu-ray releases of this feature. 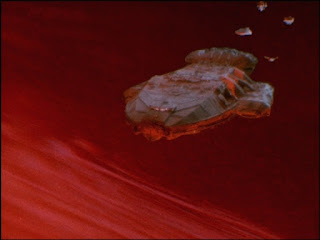 The really important thing of course is that the story is sound and the acting is pretty solid with some good characters and casting and having Lorne Greene as Adama and Ray Milland as Sire Uri sets the standard, the addition of Lloyd Bridges and Wilfred Hyde-White add weight and help out the younger and more open styles from the likes of Richard Hatch and Dirk Benedict. John Colicos as Baltar steals every scene and Jane Seymour once again proves she had talent after her Bond appearance and before her dominance of US family themed drama.
Saga of a Star World begins with the Battlestar fleet being ambushed and the exodus from the 12 colonies, under the protection of the Galactica a couple of hundred ships of all classes loaded to capacity with survivors flee the Cylons. Civil unrest is always a hairs breath away especially when the main food stores are found to be contaminated and certain wealthy individuals are hoarding resources, the ethical minefield is addressed as is the military/civilian dynamic. The question of hiding on a seemingly heaven sent world with food and fuel also offers an incentive to once again sue for peace but only really as a plot device, there is no quarter given from the robotic Cylons who see nothing but total annihilation of the humans as their goal.
Will the fleet reach Earth and perhaps more importantly does Earth actually exist, maybe it does as there are too many small colonies spotted around the projected course so there is hope for those that complete the journey across the stars. 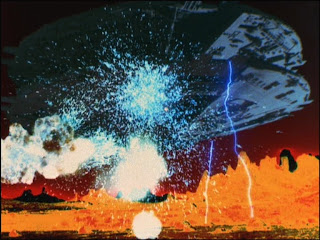 When you get right down to it the original Battlestar Galactica and it's premiere Saga of the Star World is bloody good science fiction, yes it still panders a little to the sensibilities of the US market and western society but there are a few twists and turns when keep you on your toes. I'm looking forward to the rest of the series because there are some good original stories on offer and of course a few of the regular themes transposed for scifi but nothing new there so not a criticism:)