Detained
Archer and Mayweather are taken prisoner after entering a restricted area of space
and "detained" in what amounts to an internment camp for Suliban civilians. All seems
well with their captors who promise a quick release after this "misunderstanding" but
eventually their own paranoia drives Archer to understanding the plight of these
prisoners and a break out is arranged.
Detained brought together Scott and Dean Stockwell who worked together for years
on Quantum Leap, it was great to see them together but that aside this story was more
of a object lesson in the pitfalls of social injustice disguised as compassion. 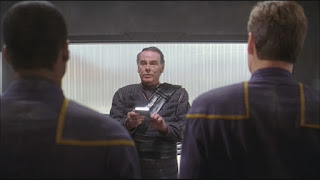 Vox Sola
An alien life form invades the ship and envelops a number of the crew bringing together
their minds and it seems it's not a creature of instinct and it may have a language.
Weak episode all round, nothing I really want to promote as being stand out. 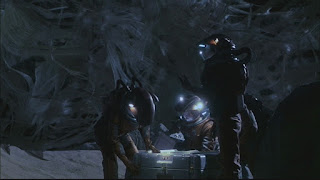 Fallen Hero
The Vulcans request that the Enterprise picks up a Vulcan ambassador and then
rendezvous with another starship but complications arise when it seems she has
abused her position and elements of the government chase the Enterprise down.
This is a good episode both for showing the ship and crew working at their best and
for developing the Vulcans via T'Pol and V'lar ( Fionnula Flanagan ). 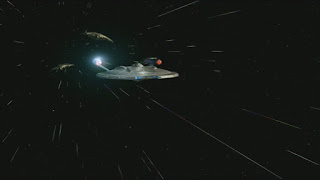 Desert Crossing
Clancy Brown chews up the scenery as Zobral the trader who takes aid from the
Enterprise and offers his hospitality in return. Of course there are ulterior motives
and it's revealed that he wants Archer's help to overthrow in his eyes a corrupt
regional government. Archer and Trip are then caught in the middle as both sides
trade punches in the desert.
This is a fun episode thanks to Clancy but the overall story doesn't work very well,
you have to accept too much to make it work. 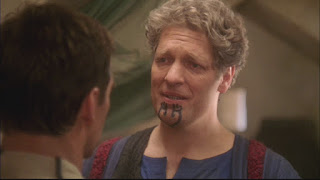