Singularity
During an investigation into a black hole the crew slowly comes down with a malady
that manifests as a sort of obsession with whatever each person deems important at
the time. T'Pol seem unaffected and despite Reed trying to mutiny and Hoshi make
the worlds best soup everything turns ok.
Alas pretty much a rehash of a generic Trek story. 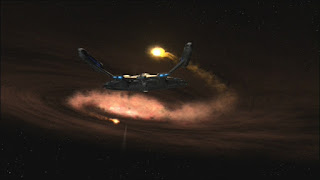 Vanishing Point
Hoshi is forced to use the transporter and then believes her molecules were not put
back together again correctly, she believes she is slowly becoming invisible and much
to her horror Phlox confirms the fact. After "dying" Hoshi is even more shocked to find
herself still very much alive but unable to communicate and then discovers aliens from
the planet are planting explosives onboard the ship.
This wasn't a good episode, I'm afraid they haven't done enough work on the
character in the first season and well any episode with this pay off needs to be bloody
fantastic not to have you throw the remote at the tv. Precious Cargo
A transport ship asks for help repairing a cryo pod carrying a beautiful alien medic back
to her own world but she revives and all hell breaks loose. Trip is trapped on board the alien
ship when it flees with it's kidnapped cargo forcing Trip and the woman to effect escape and
then crash land on a nearby world where romance ensues.
Padma Lakshmi who played the alien woman Kaitaama is absolutely drop dead gorgeous and
looks really good when water logged but alas we've seen this style story before on Trek.
It wasn't that bad an episode it just pushed the bounds of credibility a little both Don Juan Trip
and the escape:) 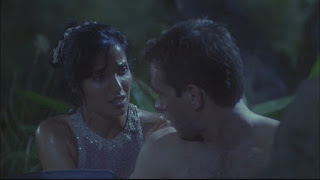 The Catwalk
The Enterprise is warned of a wave front approaching that can not be escaped by a warp 5
ship, ok that's so ridiculous why bother watching the rest of the episode.
I did though and while I guess it's possible the crew with limited resources and sanitation and a
dog can live in the nacelles for a few days it's quite remarkable they get boarded just at their
most vulnerable point.
Lets say this wasn't my favourite episode, some nice graphics though. 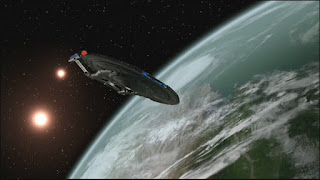