Picture if You Will
A trading post offers bits and bobs for the unwary. Chiana purchases a painting
which seems to both predict the future and reveal hidden truths but it's a trap
laid by an old enemy. 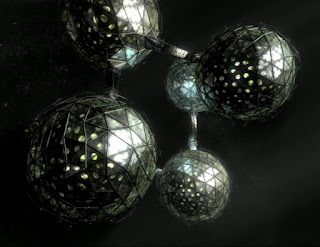 Home on the Remains
Zhaan is desperate for nutrients provided by real meat so Moya visits a mining
facility inside a huge dead space beast. Problems arise when Chiana's past once
again crops up and it's not all sweetness and light.

Dream a Little Dream
What happended to the crew whilst John, D'Argo and Aeryn were missing?
A tale of a world where Zhaan is arrested and unjustly accused of murder and
Rygel and Chiana rise to the challenge.

Out of Their Minds
A damaged alien warships fires on Moya believing her to be in league with Talon,
thanks to the defence screen she is undamaged but the energy causes the crew to
swap bodies with jiggly yet hilarious results.
One of the best and funniest episodes of the series and combines slap stick humour
with some fairly serious alien related issues. 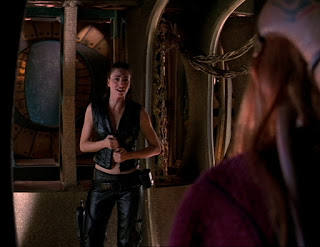 My Three Crichtons
A mysterious probe envelops Crichton and suddenly there are three of him at various
stages of evolution. The probe intends to return with a specimen but the crew sees
something in each of the versions of Crichton but one has to go.
A nice idea on the idea of replication/cloning an oft used idea in science fiction. 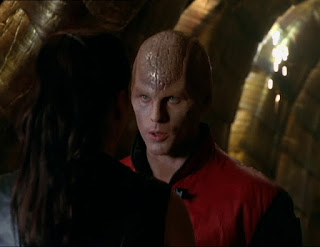