Bone To Be Wild
Trapped in an asteroid field Moya and her son detect a distress call from a nearby
source and the crew go to investigate. A survivor is found telling a tale of a ravenous
beast that had killed her entire family but all is not as it seems.
Meanwhile Moya asks Aeryn to name her son in honour of Aeryns friendship and
help in comforting the nervous young leviathan.
We are also introduced to Lt Braca played by David Franklin. 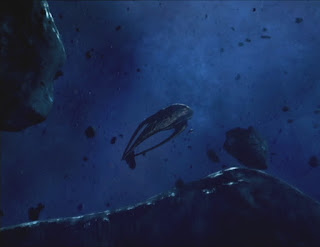 Family Ties
Rygel abandons Moya to deal directly with Crais to save his own hide but finds
that he Peacekeepers will not be honouring any deals and even Crais is being
sidelined by Scorpius who wants John at any cost even the destruction of the
Peacekeeper base. A worthy finale to the first season with a good cliffhanger built
upon solid story telling and excellent CGI. 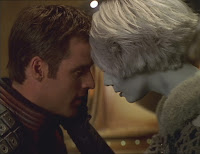 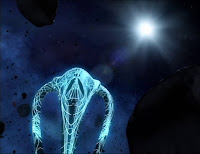 The first season of Farscape may have been the last, the renewal came very very
late and then promoted the movie away from the FOX studios to their own facility
(sans sound stages). If nothing else is taken from the first season it's the fact that
Farscape set standards in alien life design and creation on camera the likes of
which few theatrical features have matched. Couple that with some very likeable
and pretty down to earth characters and both dramatic and humorous writing
they were onto a winner.

It wonderfully imaginative yet built on a very simple fish out of water premise. The creatures and alien characters created for the show by Henson are second to none in terms of scifi TV.