2015 Seasonal TV Viewing - While You Were Sleeping

While You Were Sleeping

This feel good movie is a Sandra Bullock romantic comedy and one of her earliest, produced after her breakout in Demolition Man and the huge hit Speed which really gave her career a boost. In this movie she is a lowly cashier/collector on the city's network of elevated trains who is mildly infatuated with a guy (Peter) she sees on daily basis. Working on a christmas eve she sees him accosted and he falls onto the tracks, she jumps on to the tracks and saves his life. A slight hiccup at the hospital has the staff and the man's family believing she is his fiancee and this surprising but most welcome news helps the family get through the holidays while their oldest son is in a coma. Meanwhile complications mount up as the lie is played out and to add a further twist Lucy (Sandra Bullock) and Jack (the older brother) played by Bill Pullman fall in love but neither will admit it thanks to guilt and existing obligations. It all comes to a head after Peter awakes from his coma and well he asks Lucy to marry him (for a second time as far as he knows) and we get the classic farce wedding scene as everything comes to a head. 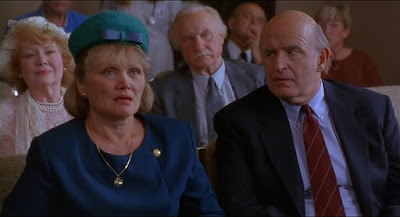 While You Were Sleeping is an excellent romantic comedy and a great feel good christmas movie, there is not a bad character or performance in the entire film even Joe Jr. Since I watch this movie every christmas I've taken last years blog entry and tweaked it a little, my opinions haven't changed, this will always be on my must watch list at christmas if not anytime.

Email ThisBlogThis!Share to TwitterShare to FacebookShare to Pinterest
Labels: 2015, Seasonal TV Viewing, While You Were Sleeping