E²
A dangerous short cut leads to a temporal fracture which throws the Enterprise back
over a century and eventually the two ships once again meet each other, the descendants
of the original crew failed to stop the Xindi attack but offer their help to but ultimately are
willing to sacrifice the original Enterprise.
A top notch episode with time travel and cause and effect in play which all seem to be side
stepped these days with the alternate timeline/dimension but here it's good old fashioned
cause and effect. There is a lot of humour and drama to be had as we discover who paired
with who and the advances in technology and new aliens on board the old ship but it's
T'Pol whose still alive who holds the key to the future despite the misgivings of her own son. 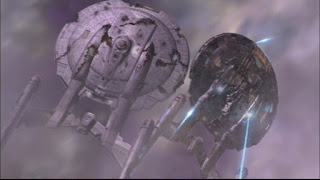 The Council
Archer finally gets to address the Xindi council and offers up the evidence they have
gathered from both the attacks on Earth and the sphere builders, some of the council
are willing to listen but others are too eager to embrace the promises made by the builders
and the power that they belive will come with it. As Archer pleads with the Council a strike
team is sent to a sphere to gather more evidence but before any resolution is reached Degra
becomes the victim of his own beliefs.
Another very good episode as the story builds to it's conclusion, everything is being
ramped up as the Xindi begin to doubt the word of the sphere builders but the Reptilians
and Insectoids the most aggressive of the species break away, no doubt in their mind. 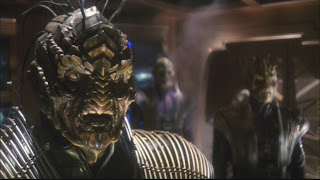 Countdown
Hoshi is tortured by the Reptilians in the hopes she will be able to break the encryption
on the weapon which would allow it to be launched without the consensus required but
a rescue mission is launched with the MACO's
suffering casualties. The friendly Xindi finally throw in with the humans and engage the
Rep/Insect fleet but the sphere builders interfere creating anomalies which cause devastation
amongst the allies. Again another solid episode with spectacular space combat and one on
one fighting as the MACO's storm the weapon but as with all good stories the bad guys
escape and we go down to the wire. 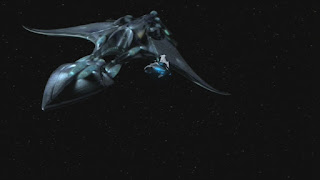 Zero Hour
Archer and a few of his crew on board Degra's former ship chase down the weapon
and are joined by Shran and his warship, once again Archers decisions to do the right
thing is paying off in spades but they are all still relying on the ENterprise to destory the
focal sphere in the network. If they can destory Sphere 41 then the whole chain will collapse
and maybe the Expanse will cease to be but the risk is huge, wait too long and everyone on
board the ship will be dead. Meanwhile Daniels pays Archer a visit and shows him the birth
of the Federation which requires Archer to be part of it's inception but he fails to convince
Archer not to sacrifice his life in the attempt to destroy the weapon.
When the dust settles the Enterprise is returned to Earth via one of the Aquatic ships to be
told that Archer did not survive but upon approaching the Earth they find a sky void of
satellites and communications and then a shuttle is attacked by prop drive fighters, something
has disrupted the timeline. 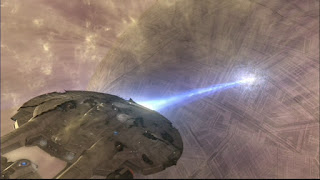 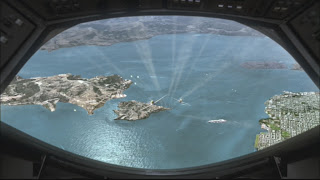 What an absolutely fantastic batch of episodes to wrap up the Xindi story arc, it has been
a wonderful example of serialised story telling and while there were one or two clunkers
mostly when trying to do a standalone episode everyone involved should be proud of the
work they have done.