S6E1 "Exile on Main St."
Dean now living a normal life with Lisa & Ben is drawn back into the hunting game when targeted
for revenge and Sam then turns up. As a season opener there are issues mainly down to creating
an arc when the show was geared up for 5 seasons but it's a reasonable start.

S6E2 "Two and a Half Men"
Babies are going missing after their parents are butchered and when investigating the guys
discover at least one child was conceived while the "father" wasn't even in town.

S6E3 "The Third Man"
The Angels are back in force as a civil war is waged with Castiel one one side and Raphael
on the other. Meanwhile an angelic weapon is loose on earth and an Balthazar (Sebastian Roché)
an old friend of Cas is implicated.

S6E4 "Weekend at Bobby's"
Lots of fun as we see the day to day grind and mild highlight of Bobby's life from burying
a vampire to breaking into the local library and torturing a demon while flirting with the neighbour. 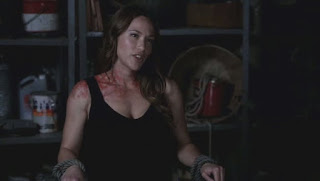 S6E5 "Live Free or Twihard"
It's vampire time as the show takes the proverbial out of the Twilight craze and with a twist we see
a side of Sam that is certainly worrying and downright dangerous.

S6E6 "You Can't Handle the Truth"
The truth can kill even more so when a goddess is involved but it's the catalyst for Sam and Dean
to open up to eachother even if neither one is happy with the results.
Serinda Swan plays Veritas. 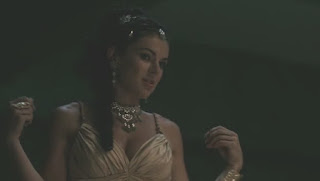 S6E7 "Family Matters"
Sam and Dean with the remaining Campbell clan go after the Alpha Vampire and they capture him yet
lie to Dean's face and claim they burnt it there and then. Tracking them done they find the
facility and discover who is behind the rescue of Sam and the current situation.

S6E8 "All Dogs Go to Heaven"
All manner of monsters are roaming the world and it seems a Shape shifter is involved in murders
around town but who or what is the shape shifter, a nice twist and rather sad end.
Weakest episode so far and one I skipped through.

S6E9 "Clap Your Hands If You Believe..."
Aliens are abducting people including Dean but what if these aliens are not from outer space
but are one of the many races that occupy the cracks in our world. A fun episode as Dean
is probed and so is Sam in a slightly better way, guest star is Robert Picardo. 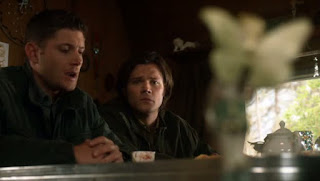 S6E10 "Caged Heat"
A deal is done between the brothers and Meg despite what she has done in the past since taking
on Cowley on his own ground is very risky, it's doesn't go according to plan but it's a cracking
episode. 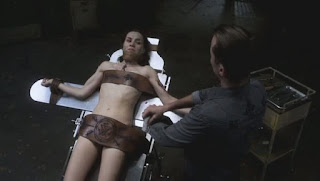 S6E11 "Appointment in Samarra"
Dean pays Death a visit and convinces him to help rescue Sam's soul but the condition is that Sam
has to wear the ring and for a day do the duties of death and as you would expect there are those
that Sam can happily kill and others he can not. Another top notch episode as the point about
consequences is hammered home.
Posted by Jarrak at 18:00