S4 Premiere "Lazarus Rising"
Dean emerges at the crossroads miraculously reprieved from hell but who rescued him and why?
After some mild effort Dean convinces Bobby he is the real Dean and then has to do the same with
Sam but he's got his own little secrets to hide.
An excellent season opener and probably the only logical next step in the brothers story. 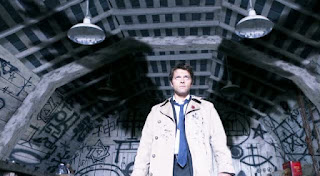 S4E2 "Are You There God? It's Me Dean Winchester"
The mystery of the rescue now know has to be dealt with as well as the fallout from within
the whole supernatural community. Meanwhile hunters are being haunted by those they failed to
help and are being exterminated en-mass and the bothers and Bobby are next in line. 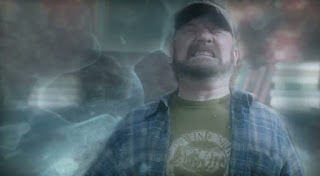 S4E3 "In The Beginning"
An excellent time travel story in which Cas sends Dean back to when his mother and father were just dating
and Dean learns a few home truths about his family.
Top notch episode and it's always good to see Mitch Pilleggi and Amy Gumenick is beautiful. 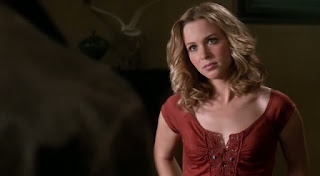 S4E4 "Metamorphosis"
A driven hunter on the trail of a "Rugaru" a flesh eating beast which evolves from what is to all intents and purposes a genuine human until it's DNA triggers the change poses a moral dilemma, do they kill the man/beast before it takes a life when perhaps there is a chance for it to live a semi-normal life. Joanne Kelly (Warehouse 13) guest stars. 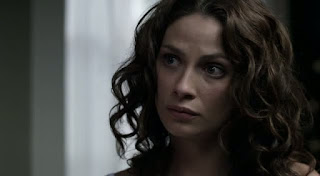 S4E5 "Mosnster Movie"
Shot in B&W with all manner of call backs to the glory days of the "b" movie monster flicks this is truly a fun
episode and homage to the movies that laid some of the ground work for the show itself.
The boys are investigating a Werewolf attack around an Oktober Fest event then a vampire attack,
a mummy attack and well just sit back and enjoy the fun:) 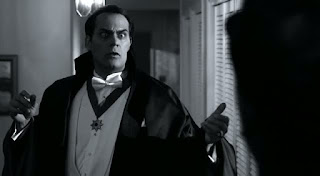 S4E6 "Yellow Fever"
Men are dying of fright and then what ever is causing this outbreak effects Dean and we get an episode part out and out slapstick with what was a very dark story. Not my favourite episode but as always one or two bits which had be laughing myself silly. 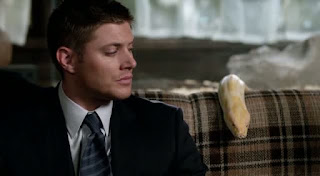