My Random Journey Through Trek #37

The Enterprise is minding it's own business, all is calm and Geordi is handling a new crew member down in engineering, after a minor incident involving hot chocolate the Captain heads back to his quarters but finds himself on a shuttle pod in the middle of nowhere along with Q. Well that was kind of a surprise to Picard who reacts poorly to anything Q has to say but eventually agrees to hear him out if he is returned to the Enterprise. Meanwhile Guinan seems to be uneasy but everything seems fine until Deanna asks where the Captain is and the computer reports he is not on the ship and a shuttle is missing, not long after the Captain and the shuttle reappear, tada.
Q offers to become a member of the crew to aid them in their journey further into the galaxy but the senior staff are not very responsive and Q sees little but arrogance and complacency and so he decides to teach them a lesson and with a snap of his fingers the ship is flung 7000 light years. An immediate scan detects a planet whose civilisation seems to have been destroyed and then they are scanned by an unidentified ship and a huge cubed vessel approaches. 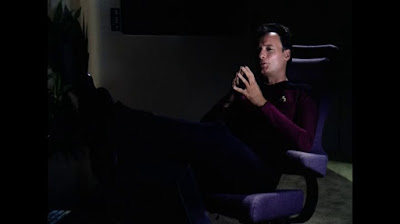 Guinan immediately councils the Captain to flee but he decides to stick around and make contact, no response but the captain seems uneasy and raises his shields and then an alien beams straight into engineering and begins to inspect the systems. Q warns Picard not to let it gather too much information but when they disable the Borg another beams onboard, completes the scan and leaves. The Borg make contact with a simple statement and then begin to slice up the ship, Picard fires on the Borg and eventually they cut the tractor beam holding them in place and take the opportunity to board the cube and gather information. The find the drones most of which are in their alcoves, a nursery full of baby Borg and then they realise the ship is regenerating and will soon be back into full operation, they beam back and jump to warp with the Borg in pursuit.
The cube easily maintains pace with the Enterprise and fires on them not to damage but to disable the shields and soon they fail, Q looks rather smug while watching the last moments of the Enterprise but when Picard admits they are not prepared and need help Q once again snaps his fingers and the Enterprise is back where she started but the 18 crew that died are still dead. 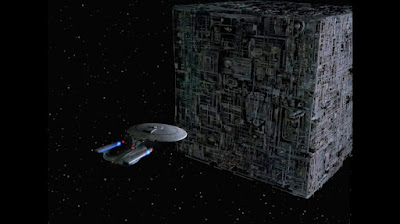 Q Who? is an excellent episode of The Next Generation and really the first that makes the most of the Q character when played by John deLancie which he does with utter pannasch. However despite the episode getting a very good rating (as you will see) there were issues and that's pretty much par for the course especially with early TNG. We kick off with Ensign Gomez (Lycia Naff) a new crewmember who likes her hot chocolate and is casually walking around engineering with an open container, granted 24th century consoles should be safe from liquids (you would have thought) but it seems less than professional. We also get Geordi being very informal with "Sonia" perhaps an early sign of Geordi being less than stellar in his dealings with fellow crewmembers but the way he treats her is in stark contrast to say Barclay in later seasons. I have to say Picard could have easily walked around Gomez who had her back to him so the spilt drink was partially his fault anyway.
So Picard steps off the turbo lift onto the shuttle and while technically Q hasn't messed with the ship the removal of the Captain has consequences or so you would think, no one notices he or the shuttle are gone and even the computer which you would have thought would be aware on of the crew vanishes along with a shuttle would have said something. Guinan has her spidey sense tingling but it's finally Deanna being useful who finally reveals the Captain is gone, a search pattern is engaged and off the go in search of the impulse only shuttle. I actually quite liked some of the back story they were hinting at with Guinan and Q but since they really never followed that up lets forget about it as well and enjoy Q being Q dissing Worf and well everyone and he is right that Picard and the crew are arrogant and full of themselves shown quite clearly when in Borg space Picard ignores Guinan a woman he trusts and sticks around for a bit of sightseeing. I had to laugh when the Captain ordered Worf to deal with the initial Borg incursion, that's it order one of his underlings to throw himself into the fight yet how many times do we see Worf act or attempt to act like a wild dog going for the throat every time and held back by Picard or Riker. I was also pretty appalled how pathetic the ships sensors and targeting systems were, Picard orders the tractor beam disabled and it's not until the hit the emitters that it stops, so sloppy shooting their Tex. Gomez appears in engineering yet again and you would think the experienced crew members would be on duty not a fresh transfer who is still being brought up to speed but we get some emotional dialogue to emphasis the deaths of the 18 crew who got sliced and diced by the Borg. I also wondered if the Borg were playing possum with the Enterprise but I guess with their first appearance a lot of "rules" were still in flux so we can forgive some peculiarities with how they behave, this certainly applies to the Borg nursery.

All in all despite the issues I had with the episode they fail to make any real dent in the overall quality of the episode, Q Who? is a great introduction to the Borg, a really good character building episode for Q and a kick in the guts for how we the viewer may even view Starfleet and the Enterprise.
Oh and some of the cinematography especially involving Q looked fantastic.