Hatchery
A crashed Xindi ship is discovered and the landing party find that the crew has
sacrificed their lives to maintain the life support for their unborn offspring.
Archer becomes obsessed with keeping the young Insectoids alive and a
mutiny onboard the Enterprise leads to a direct confrontation.
An interesting episode but kinda falls flat over the lack of backbone by the
senior officers and Doctor when faced with a captain obviously not acting
normally or within mission parameters. 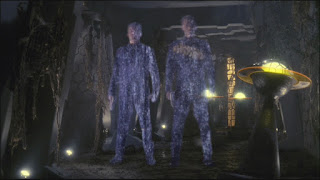 Azari Prime
The Enterprise uses a Xindi ship to recon the world where the weapon is
being constructed. Archer decides to lead a do or die mission to destroy
it but Daniels appears and shows him the future that can be created if
Archer helps to create the Federation which in time will face down the
very people who built the spheres.
A wonderful episode which spells out a lot of events which have lead to
where Archer and the Enterprise are and Archer accepting the bigger
picture that peace is not going to be achieved through another violent act. 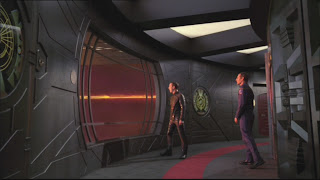 Damage
Archer is returned to a badly damaged Enterprise but they still assist another
vessel in distress that is until they have to make a rendezvous with Degra and
without warp capability the mission will fail. An assault against the other vessel
is led by Archer leaving the aliens with only sub-light propulsion.
A big moral and ethical dilemma for Archer but you can hardly say he was wrong
in making the choice he did but easy to see how many ships/species have been
forced to act in a similar manner within the Expanse. 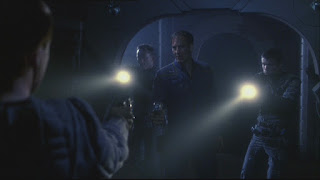 The ForgottenDegra meets with Enterprise and is shown the evidence of the Sphere builders
and time manipulation by the Reptilians. Tripp has issues and acts like an idiot
undermining his Captain, the mission and his own rank and responsibilities on
board the ship.
I was pulling my hair out in frustration at the ridiculous antics of Tripp during the
episode, it was weak drama to say the least but if we take it seriously the guy
has no place in command. 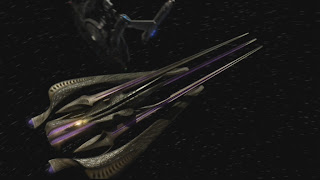