I've been circling the new Ipad for a few weeks now looking for a full colour more flexible device to replace my Kindle, now the Kindle does an excellent job but Amazon have not offered an upgrade path with the Fire in the UK and well I'm  fed up of waiting.
The delay in buying the new Ipad however was based on the price and the need for the 3G option and broadband data only deals are not that attractive but my cash back scheme (Quidco) offered a 2.5% deal which while only a token amount just pushed me over the edge. So I ordered and received a Personalised iPad 3 with Wi-Fi + Cellular 64GB in Black and you know took to it straight away, within minutes I've fell in love with this device to a level I never got with my laptop (hate it's touchpad) but I'm doing things on the Ipad that were always at times infuriating on the other machine. 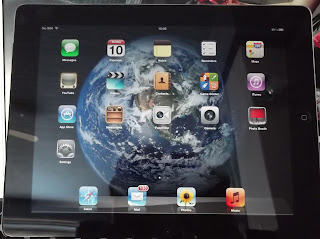 As for the apps well I've loaded up the obvious ones such as Facebook, Twitter, Kindle, LastPass and various streaming options (BBC, Ch4 etc) even though the video streaming will be restricted to wifi delivery (cost per meg). One of the important abilities I wanted was to be able to access my Dark Horse Digital comics and I have to say the mobile device is how it should be done, a whole new appreciation of such content is opening up to me. Lets not forget the GetGlue app which if you know me then I use that service quite a bit even though they seem to be ducking on the their sticker obligations oh and the Youtube app is fantastic, the best way of accessing that service I have used so far and finally able to really enjoy my subscriptions. 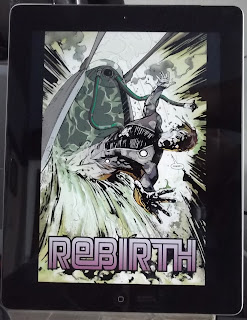 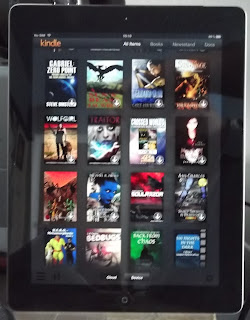 Nothing is perfect of course so having a touch screen is always going to be an issue when it's highly reflective, the oil and grease left on the screen can't be good so I'm getting some disposable screen protectors and see how they work and if the Ipad is going to go on my travels it needs a proper case/cover. There are lots of options and designs here but given that the size and weight of the device is a selling point then you don't want a cover to ruin that and at least it has to match the aesthetics.
One interesting aspect was the lack of documentation with the Ipad however at the box it was very easy to setup and get working probably even easier for those more familiar with other Apple devices or the latest phones and tablets. I have had to look up how to delete apps and any tricks and tips on itunes/ipad syncing as well as supported media formats but after a couple of days I'm pretty close to where I want to be.