My Random Journey Through Trek #36

The Dominion and the Cardassian fleets are wiping out all resistance within the regions surrounding the wormhole, the combined Klingon and Federations fleets are being decimated and the 7th fleet is all but lost after a disastrous engagement. Sisko and the Defiant are recalled for reassignment and he and his crew are given the recently captured Jem'Hadar fighter for a high risk mission deep inside Dominion controlled space to destroy one of the few Ketracel White production facilities.
All initially goes well until they are attacked by a Federation starship and lose communications, they are forced to drop from warp and engage the starship in the hopes of deterring a fight to the death but it flees as three Jem'Hadar ships arrive and pursuit. They arrive at the small asteroid which contains the facility, it's protected by a force shield but observing other Jem'Hadar ships and protocols allows them to gain access and they beam down their empty containers (some containing explosives) and await their new supply of the drug and for the force field to be lowered for departure. However as time ticks by with no clearance tensions arise but then a huge explosion rips the asteroid apart and their ship is caught in the blast radius and is badly damaged.
During this two week plus period we are see that life onboard the former DS9 is slowly returning to normal but still Gul Dukat is refusing to turn over security to the Bajorans but Kira has an ace in the hole in Odo who when he requests his own security for the civilian promenade Weyoun instantly agrees albeit with a small request.

A Time To Stand is the season six premiere episode and is set three months after the Dominion and Cardassian assault on Deep Space Nine and the mining of the wormhole. It's certainly not going well for the Klingons and the Federation as the Dominion defeats them in every battle and is winning the hearts and minds by treating Bajor with respect and honouring their deal despite Dukat chaffing at the bit to impose his own desires upon them. 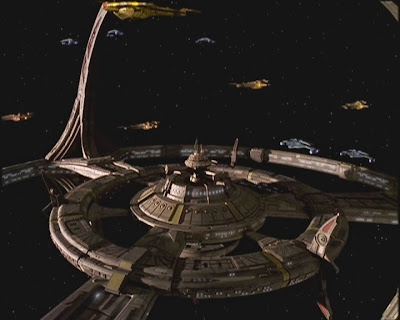 As always it's a delight to have Garak (Andrew Robinson) in an episode and the new more "rougher" Bashir is actually a breath of fresh air, granted the arrogance is still there but since the revelation of his upbringing at least it has some merit. Mind you I couldn't really understand why it was Bashir bringing news of the seventh fleet, surely during a major war protocols would mean sensitive information being passed through the com officer maybe even encoded direct to the commander rather than through the ship's doctor. Oh lets not forget Martok and Worf coming aboard the Defiant (some warning to the Captain would surely be the norm) but we did get the happy reunion with Dax and well tears to the eye, what a great couple Jadzia and Worf made. The episode flips to life aboard DS9 and we see a heavy military presence but Quark is doing good business and alas he kinda sums up how the majority of sentient races would look at the situation, it could be worse. Kira is having issues with Dukat as you would expect but it made an awful lot of sense to make use of Odo and his links to the Founders, Weyoun was only to happy to grant every request but wheels within wheels by getting Odo onto the stations ruling council it legitimises the Dominion presence that little bit more and of course moves Odo slightly further towards the Founders.

Yes I know the questionable piloting of the repurposed Jem'Hadar ship was there for a laugh but come on inertial dampeners would be default, this ship would never be a rockin'. It was an interesting look into the technology of the ship though with no chairs, replicators, infirmary and restricted visuals when from a pure combat vessel with it's intended crew made a lot of sense, amazing any ship could stand up to this type of vessel given it's advantages, power utilisation etc.
I also liked the choice of using a practical model and explosion for the asteroid base, granted it looked out of place but I am old school even though some of the CGI visuals in the episode were spot on especially as the ship rode the shock wave and was battered and bruised with no functioning warp drive and 17 years, 2 months and 3 days away from help.

A Time To Stand was an excellent season opener and kicked things off nicely as things look even more bleak for the Alpha Quadrant with the ongoing attempts to bring down the mine field and flood the quadrant with Dominion reinforcements.