While Christopher L. Bennett is an established author both in and out of Star Trek the novel Ex Machina is the first novel of his that I have read, it may be because he's written more for other aspects of Trek than the original series and perhaps because when the book was originally released I wasn't reading Trek after the market moved away from TOS to the more modern series which I had little interest in reading. I have started reading more Trek which is going hand in hand with more new original series offerings and as we all know once you scratch the surface there will be plenty of older work which will be new to you. Ex Machina is one of these old yet new gems released in 2005 and telling a story shortly after The Motion Picture when Kirk and the Enterprise crew were trying to get to know each other again and faced with a mission from their past when has personal and Federation wide implications. 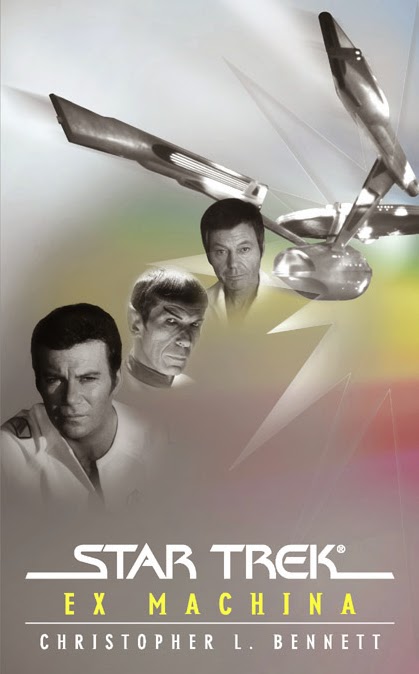 In Ex Machina we see a Captain James Kirk who is very unsure of himself, his crew are openly voicing their doubts over his command and since most were hand picked by Will Decker and supported his multi-species approach to crewing a Starship there is plenty of blame being pointed to the new Captain in terms of how he got the command the loss of two elements of senior staff. Spock is perhaps in even worse condition, his contact with V'Ger shook him to the core and has led him to question all things Vulcan and dealing with some of his people on board just shows how far away from balance he has travelled. McCoy is perhaps in even worse condition, drafted back in Star Fleet, dealing with Chapel as an equal and the mission dealing with the people of Yonada and his brief romance with their leader Natira. On their new world the people are dealing with a life free from direct mental conditioning from a super computer disguised as a god and religious elements are clashing with more forward looking aspects of the government. As bombings and attacks grow leaving innocent men, women and children dead the Federation via Kirk decide to intervene first very gently but more aggressively but the solution is far more complex than anyone could envision as Kirk is seen by some to be a God killer after the V'ger incident and Natira by supporting modernisation and the throwing down of old beliefs complicite in the betrayal of their ancestors when Yonda was launched ten thousand years previously.

Ex Machina is a weighty tome, there is little of the light heartedness many of the previous TOS novels were happy to provide which mirrored the series itself but the subject matter deserves the more constrained and deep approach. This novel focuses on the characters and the changes that have taken place over the years after the first five year mission most of which have been artfully ignored in the media. I suspect print media is the logical place to explore much of what has gone on before we were once again introduced to Kirk and company in ST II with a more action/adventure story line. An excellent original series novel, fills a hole I wasn't really sure needed filling but now after reading the book the timeline is more complete and helps to build continuity which for me doesn't always means relying on television or the movies. Highly recommended and while I doubt I'll be looking at Christopher's work on other aspects of the franchise his Enterprise novels could very well turn up on my reading list :)