An alien vehicle positions itself over New Chicago and then Princess Ardala turns up with a simple ultimatum, give her Buck Rogers to be her husband and she will not destroy every city on the planet. The council are not co-operative and Buck goes on a camping trip but eventually he goes to her warship and to prove himself he has to fight Tigerman and then he will become the husband of Ardala who is due to take the crown of the Empire from her father. 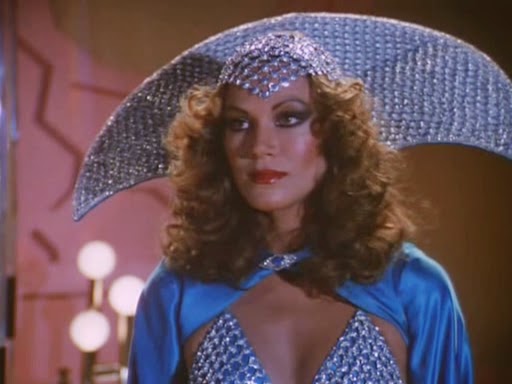 Well Ardala returns which wasn't a surprise and no doubt Pamela Hensley is very easy on the eye and does ham it up wonderfully as the princess who really has few limits but I can't help but think if she had come to Buck openly and yes pointed out the consequence then being husband to the new Empress would not only have protected Earth but been a pretty good life, she is after all totally in to him. Nice to see Kane return albeit played by another actor and of course Tigerman:)
That said I don't think we needed the roller disco show, was there really a time when that was considered a good idea and lets hope Ardala has learnt her lesson, sleeping with Buck means literally sleeping as he drugs her and has his own adventures.
Loved Twiki at the end wearing the headphones and listening to Meatloaf but overall a silly story with one or two good bits like the orbit weapons platform which reminded me of a Xindi in Enterprise a little too much:)
IMDB

Cruise Ship to the Stars

Miss Cosmos the most genetically perfect human in the galaxy is on a cruise and becomes the target of a woman who has telekinetic powers, Buck becomes her security chief and Wilma goes undercover to ferret out the thieves using valuable jewels as a lure. It turns out that the thief is able to morph into another human who then is unaware of her other halves activity, the perfect disguise but it's the innocent part of her that eventually approaches Buck and opens up the investigation revealing the truth.

Ok a Miss Cosmos in the 25th century sounds ridiculous but at least they have the twist that it's based on the persons genetic profile but time has moved on and needing her actual body to gain access to the code in our age of cloning and manipulation seems a little strange. It also begs the question how has any human who is the product of a nuked earthed can have anything close to a perfect genetic makeup or is Miss Cosmos not human human even though she would kinda have to be in the context of the story.

Wilma was rocking the heiress look, great legs on that woman and quite rare to see her without the skin tight outfits she normally wears and a nice touch to have the tragic Dorothy Stratten as Miss Cosmos, one of the beauties of her era who was murdered for who she was.
IMDB

A couple of average scifi episodes, ok for the time they were released but fall way short of what would be required for scifi today.