Bound
An Orion trader looking to do business with Earth gives Archer three slave women
who shall we say play the part exceptionally well:)
As usual even with their suspicions raised (amongst other things) the crew get
themselves into trouble and end up in a fire fight with Orion warships.
This is a fun episode, the three Orion women look great and the performance is
a huge call back to the original pilot but with a little more skin but I can't accept
that the women have the power on a cultural/social level, for this story fine but
the premise is a little too much. 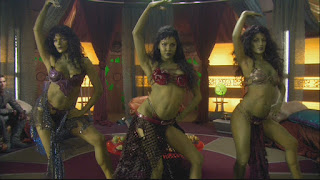 In A Mirror Darkly I
A Mirror Universe adventure with no direct crossover from the existing characters, a
first for the franchise and it works quite well. In the first part of the double bill we have
Archer taking over the Enterprise and committing to an unsanctioned mission into
Tholian space to retrieve a ship based on some questionable intelligence.
An excellent episode, every looks great, the ship looks great, Porthos is rockin' and
the Vulcans are Starfleets bitch:) 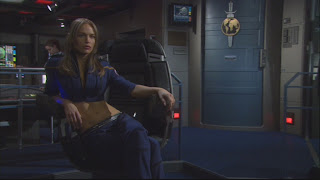 In A Mirror Darkly II
Archer now onboard the captured Starship runs amok amongst the rebel starships but
once again takes his own future in his hands when his superiors do not share his vision.
The rebellion plays into his hands but once again those that live by the sword can die by
the sword and the Starship is used to fling Earth into even greater dominance over the
Alpha quadrant.
Fantastic conclusion to the story with a lot of action and suspense and while it may be
reaching to marry the episodes conclusion with the TOS episode it doesn't totally
fail. Oh yes T'Pol and Hoshi kick ass and isn't it strange that some of the weaker
characters in the show really shine in this mirror universe. 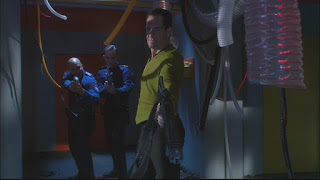 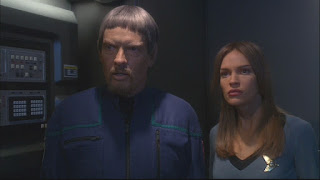 Demons
Xenophobia is growing and there are those who will stop at nothing to
isolate Earth even from alien species who we have allied with and helped us.
The separatist anti-alien group Terra Prime is looking to stage a major political
and social coup using a vulcan/human hybrid cloned from genetic material gained
from Trip and T'Pol and then who knows, what lengths will the deluded go to.
A strong first half to the two parter which brings to the front the rumblings
we heard after the Xindi attack and perhaps the rise of a minority opinion from
those opposed to change and growth. Peter Weller chewed the scenery:) 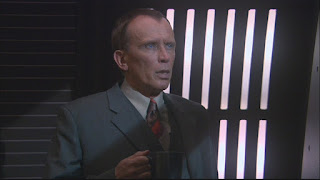