My Random Journey Through Trek #40

A sensor sweep of a ringing planet reveals an unknown element to Federation science, the asteroids in the ring prove to be life supporting so an away team beam into one and discover some strange cobweb like substance all over the place and then they find a number of bodies each the source of the sensor readings. Captain Janeway agrees with Chakotay that they should treat this as a burial ground and take no action which would disturb it so they perform a simple visual survey much to the annoyance of Torres. While Chakotay is educating his younger officers on what they can take from the evidence of the bodies an energy vortex begins to form in the cave and Voyager has trouble locking the transporter onto them. Seska at the controls tells them to get close together for a mass beaming and as they rematerialise Harry has been replaced by a dead alien. 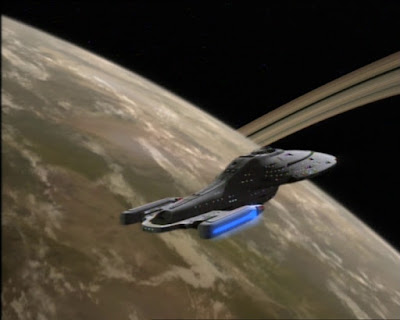 The alien however still shows signs of brain activity so she is sent to sickbay where she is revived, meanwhile Harry finds himself in what from his point of view could be considered a coffin, he begins banging on panels and it opens to reveal a room full of consoles and oh yes lots of aliens looking quite perplexed. It's explained to Harry that he is the first being ever to return from the afterlife and the aliens of this world are keen to know how their friends and family members have fared on the other side but Harry after talking his mouth off way too much soon remembers first contact protocols and attempts to be more diplomatic and careful with information. On the other side of this mysterious portal the young alien woman (Ptera played by Cecile Callan) is learning how she was treated and cured and coming to terms with the fact what she believed may not have been totally accurate or at least there are no easy answers to the questions she has. Meanwhile Harry is causing the breakdown of social and cultural order as the beliefs of many are coming under attack, doubts are being seeded and the powers that be are getting worried and Hatil (Jeffrey Alan Chandler) who was expecting to cross over is now questioning the very reason for his sacrifice, if there is no afterlife (aka the next emanation) that death is just death. Harry proposes that he wears the sacred robes and replaces Hatil and even though he will die in the process Voyager should be able to revive him, surprisingly it works but alas the attempt to return Ptera to her reality ends with her death but there is evidence that neural energy from the bodies is escaping into the rings and being maintained, maybe there is more to their one life.
Emanations was a lot better episode than I remembered especially as Harry and his blundering exploits become a bit of a trope throughout the the seven years of Voyager. It's only minutes in the presence of these aliens and Harry is already undermining their entire cultural belief system and maybe not realising that when push come to shove a terminal approach to the problem of Harry may be the ideal solution from their perspective. Let's kicks off with asteroids in a ring system being a Class M, that's a bit ridiculous but you can't beat cobwebs and mummies being discovered by an away team even more so when it's revealed the cobwebs were the remains of much older corpses. It was also very gratifying that Chakotay argued for respecting the burial site especially given it was in use, the Federation and our own people in present time would gain a lot from showing more respect to other cultures. It was also quite telling to see that the writer (Brannon Braga) made a point of the "religion" of the people being used to filter out the weaker members of the society be it a physical or mental disability and with such an ingrained "faith" it was fully accepted. You have to wonder if at some point in the distant past people in power had created this branch of belief to make use of the natural phenomenon of the subspace vacuole (portal) to rid themselves or that they were aware of the neural energy being stored in the ring system and maybe that information being lost as the belief system was dumbed down and accepted by the masses. Ultimately the inclusion of the neural energy being sustained added weight to both Harry and Janeway in their admission that they simply did not have all the answers and that is perhaps the best element of this episode, when we admit our own ignorance we can grow and not judge.
We also got a nice scene at the end as Janeway sits with Harry and basically offers him some simple advice to take the time to smell the roses while his rank allows him the time to do so.
IMDB
Rating 8