My Random Journey Through Trek #38

Paris is teaching Kes how to fly the shuttle craft and they seem to be bonding very well, good chemistry is evident and when they leave laughing and joking together Neelix observes them from the shadows. Paris opens up to Kim about his feelings for Kes and when the pair go to get some food they avoid Kes but a paranoid Neelix dumps a plate of pasta onto Paris and then the two start fighting. Voyager approaches a borderline world with signs of plant life and thus food and the Captain assigns Paris and Neelix to survey the planet and obtain plant life. Thanks to the turbulent and dangerous energy fields that surround the planet the ship can only use it's transporters during brief windows so they boys will be on their own. Alas the shuttle crashes and they seek shelter in a cave and discover some eggs, one hatches and the reptilian youngling begins to wane until they realise it requires the nourishment of the Trigemic vapors that are abundant on the world. Meanwhile in orbit an alien starship arrives and positions itself in a defensive position over the planet, Voyager is able to sidestep the alien ship and enter the atmosphere to retrieve Paris and Neelix who beam out just as perhaps the parent of the youngling arrives to collect it.
Paris, Kes and Neelix all go to share a meal. 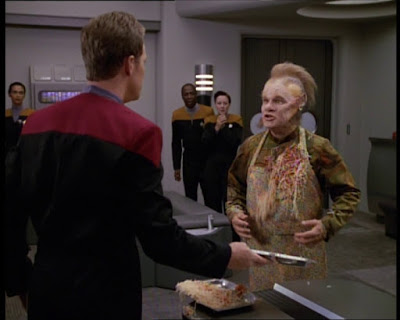 Parturition is a bit of a mixed bag, we see the very sinister and creepy side of Neelix as he spies in Kes and Paris and then the jealousy as he acts a bit like a jerk. Harry and Paris are bros that is firmly established but it seems strange that Tom is opening up in terms of his emotional state to Harry, they are different ages and in very different places in terms of their experiences. The Doctor is bumping up against his restrictions in terms of being limited to the sickbay and the Captain isn't pleased he has been monitoring the ship communications so it didn't help when Tom and Neelix appeared for their assignment covered in pasta. I think they did a great job showing how inexperienced Kes is, when she stated that she and Tom "we're just friends" the Doctor's expression spoke volumes and he had a good fatherly chat with her. He also had the best line in the episode a little earlier with "I'm a Doctor not a voyeur" which was hilarious but in reality he is a ships system and surely should have access to the crew at all times, ok maybe comms could be stretching things but a call for help may not always make itself known. So along with some extreme shaky cam Paris and Neelix crash on "Planet Hell" and discover a handy cave with wait for it three large eggs inside one just in the process of hatching, wow talk about coincidence and poor timing but they do their best and in the time honoured tradition of many a comedy these Two Men and an Alien bond as they care for the child.
As I said there were some good moments in this episode, the pasta fight and the jealousy of Neelix were not any of them, I also wondered why with 30% food reserves the crew were still eating so well and Neelix laid on a feast to regain favour with Kes. I also didn't approve of how easily Voyager defeated the alien starship which as they said had comparable firepower yet lacked the shielding to protect itself from weapons and scans, the latter which led to its defeat. I also was disappointed that Tom and Neelix were beamed out before they made any significant contact with the adult alien, maybe a simple gesture between the three to acknowledge the child had been cared for would have added to the depth of the episode but they just beam back and go for dinner. Well dinner was what Neelix said but well he is a little strange and maybe Tom got more than he bargained for, a story never told, thankfully:)

Parturition was saved from a really low score by some great one liners and some good bonding moments between Tom and Neelix in the later scenes and I suppose that's all you can say about it because it really doesn't get off to a good start.