My Random Journey Through Trek #39

The Enterprise picks up a distress signal from the USS Jenolan listed as missing over 75 years ago, they come out of warp into a previously unknown high gravity region of space and they discover a huge construct, a Dyson Sphere. 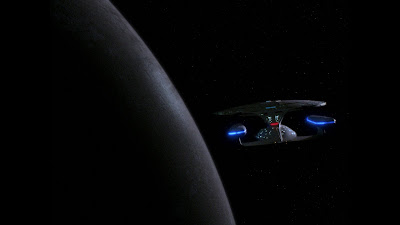 The scan the sphere and find the Jenolan crashed on it's surface and when they beam down they realise the transporters are powered and there is a viable pattern still in storage, they rematerialise the pattern and Captain Montgomery Scott is revealed, a little worse for wear but alive and well. Scotty is informed of the length of time that has passed and he marvels at the technology of the Enterprise D but is appalled at the lack of real alcohol served to the crew until Data shares some of Guinan's private stock with him, it is green. 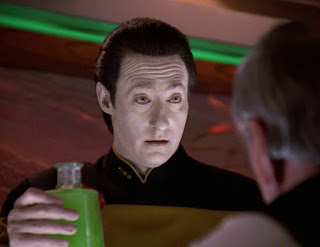 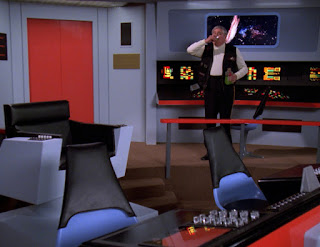 Scotty soons becomes a nuisance to La Forge who does not have the patience to deal with a man who despite his reputation is out of place on a modern engineering deck but Picard intervenes by assigning them a mission to return to the Jenolan and retrieve any data left intact in the hopes of understanding more about the Dyson Sphere and those that made it. While they are off the Enterprise it is pulled into the sphere by tractor beams and they find the inside "shell" is covered in land and oceans but the sun at the core of the construct is critically unstable and they are trapped. Scotty and La Forge figure out what has happened and as the "miracle workers" get into gear a plan is formulated and they jam the Jenolan into the portal they triggered to open thus allowing the Enterprise to escape the sphere. Scotty feels reborn and is given a shuttlecraft so he can explore the wider galaxy that is now open to him, in memory of his comrades and his ship he bids farewell never to been seen again. 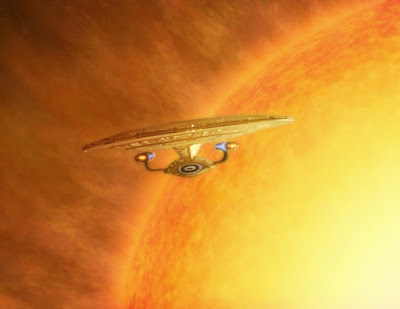 Relics is a good episode both as a standalone and as serious nod to the original series which the studio and producers had been actively avoiding but this episode showed that with some good writing you can justify bringing in a character that should not really be around and make it work. The first Star Trek novel I ever read dealt with a Dyson Sphere (The Starless World) so this episode already had me invested and James Doohan did himself proud with his portrayal of Scotty as a man out of place before pulling himself together and justifying himself in this far flung future.
I liked the references to the original series adventures and of course we all know Scotty liked his beverages and the scene in ten forward with Data was wonderful but damn what did they dress the waiter in! The Constitution bridge on the holodeck was great, not as good as DS9 did a few years later but for the time and budget it looked very respectable and again James and Patrick acted their socks off in those scenes, no bloody A, B, C or D.
Overall an excellent episode of The Next Generation and the first episode I've watched from my Blu-ray boxset I picked up from ebay the other day:)
IMDB
Rating 9