I own the original DVD's (mixture of R1 and R2) but for the price and features
not to mention the bump (albeit within the limits of PAL SD masters) in picture
quality I decided to buy the Blu-ray boxset as a christmas treat. The price had
recently dropped so that took a lot of the sting out of it so here are my
re-watch thoughts as I go along.

Premiere
The series kicks off with John Crichton a scientist and astronaut
who is testing his theory of propulsion which exploits gravitational
forces. Whilst in orbit he his dragged into a wormhole and ejected
somewhere in the universe and finds himself surrounded by beings and
wonders he could never have imagined. 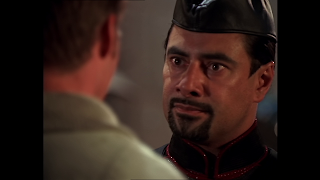 I, E.T.
A Peacekeeper device on Moya has activated and to mask the signal
the ship buries itself in a huge swamp on a nearby world. The crew
search locally for an element which can heap Moya and John finds
himself being the first alien contact for mother and son. 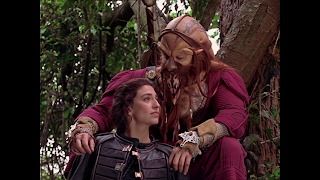 Exodus from Genesis
A strange dust cloud in space seems to be benign but an entity enters
Moya intent on exploiting the ships energy to create heat in which
to expand it's life cycle. A fun episode in which we get multiple copies
of the crew and Rygel gets to play diplomat. 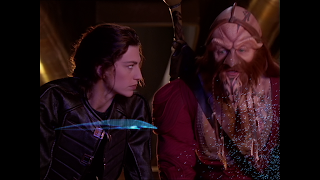 Throne for a Loss
Rygel's arrogance makes him the target for some kinappers who ransom
the rich and powerful back to their ships/people but since Moya has no
money (only food cubes) the future doesn't look too promising.
This was an episode which nearly turned me off Farscape when I first
watched it, the puppets, weak fight sequence and simply not
understanding the show had me reaching for the remote. 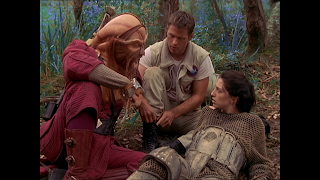 Back and Back and Back to the Future
The rescue of a research vessel had Dargo falling in love with it's female
occupant and fully committed to helping her and the scientist to reach
their destination. Things start to unwind when John is hit by an energy
burst on the alien ship and experiences jumps in the timeline revealing
all is not what it seems.
A very clever episode and underlined how good the graphic houses were in
creating some beautiful CGI on a tight budget. 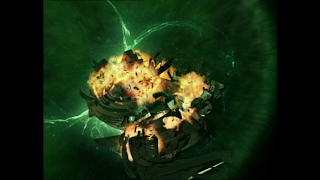 Extras
All five episodes have commentaries the highlight of which is Ben Browder
and Claudia Black on the "Throne For A Loss" episode, they are very very
funny together.