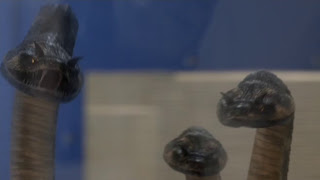 A genetics lab working on developing the venom from Horned Vipers suffers shall we say
a mishap and the highly intelligent and co-operative reptiles escape and find their way
to a small island community. Soon the casual visitors to the island get merrily eaten by
the ravenous snakes and until one of the main cast gets eaten no one seems to realise
the danger they are all in. Trapped in a number of small buildings (Hotel, Jail, Med Centre)
the survivors of the first rampage fight back and help finally arrives from the people
that were originally responsible for the genetic manipulation of the snakes, mixed
blessings I guess.


Of course in the movie we also get the usual drama with families, friends, lovers etc etc
having to deal with the "real life" issues amongst the blood splatter with the heroic
wild card being thrown in, poor timing on his part.

The leads of the movie are Tara Reid and Jonathan Scarfe two familiar names and faces but
truth be told the inclusion of Corbin Bernsen, Jessica Steen and Don S. Davis were more
appealing. The addition of Michael Kopsa, Claire Rankin and Aaron Pearl all from Stargate
just applied a nice piece of icing to this creature feature.
Always worth noting that Dan Shea the Stargate actor and stunt co-ordinator has a speaking
role in the movie, always great to spot Dan in a flick.


Vipers is certainly a "b" movie creature feature but the production value is high, the acting is
good and the effects both CGI and practical are more than suitable for this genre of movie in
fact they are a lot better than some much higher budget features.
I really enjoyed it and would be happy to add it to my movie collection but maybe not worth
the p&p etc to get a region 1 DVD, if it turns up in a bundle then I'm in but for now the recent
Syfy UK broadcast was most rewarding.
The movie was made by RHI Entertainment who now produce under the Sonar Entertainment
brand, it was released in 2008 and has a Region 1 DVD release.