Balance Of Terror
A class episode of Star Trek which pays serious homage to the
WWII submarine war movies in particular The Enemy Below which
tells the tale of two Captains both intelligent men with integrity
and honour who could indeed have been friends if there were not on
opposing sides of a war.
With the destruction of a number of outposts on the Romulan neutral
zone the Enterprise tracks a cloaked starship travelling at sublight,
what follows is a battle of wits and tactics with two very different
vessels but evenly matched. This was the first story that featured
Romulans and for me they were never better than in this episode,
far superior to the laterTNG/DS9 Romulan cultures. 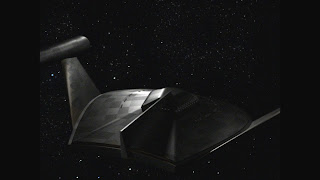 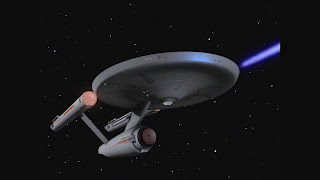 Shore Leave
This is an out and out humorous episode with it's fair shirt of menace
and underlying it a very solid piece of science fiction. On what appears
to be an empty world but with plenty of vegetation a number of the crew
beam down and begin to experience events that should not be happening,
a giant rabbit that's late and followed by a young blonde girl, samurai
warriors, a tiger and people long since assigned to their pasts.
Like I said a fun episode and a new yeoman. 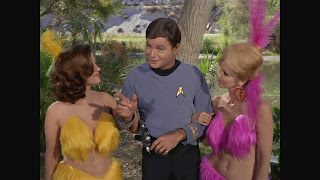 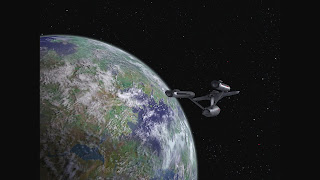 The Galileo Seven
Spock commands a shuttle on an exploration/scientific mission but during
a storm they crash land on a world with a very large primitive humanoid
species, there are deaths and Spocks use of logic clashes with the
emotional aspects of his human crew who he has to save and things do not
look good. Meanwhile on the ship a senior commissioner is pushing Kirk to
abandon the search and get much needed medical supplies to a far away colony.
An interesting tale which maybe shows how a very rigid logical line of
reasoning may not merge well under pressure situations with humans,
amongst fellow Vulcans who knows. 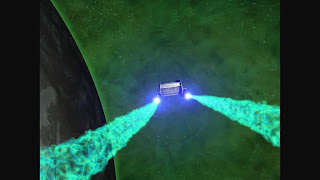 The Squire of Gothos
A world where there should be no world and an alien with strange powers
who fails to realise that spying on the Earth without taking into account
the speed of the light transmissions means your environment recreating
Earth is going to be out of date. A very large and almost over the top
performance from William Campbell but it suits the role perfectly, he later
went on to play a Klingon and for many Trelane is the prototype Q. 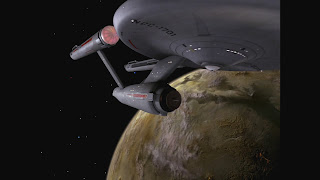