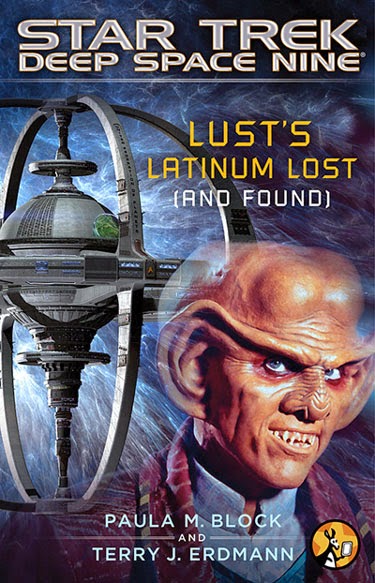 I believe this was the first DS9 book I've read and certainly my first exposure to the new station and it's occupants, while I liked the tv series I've never tried to keep up with ongoing story so a few things were a little confusing at first but I soon got into the swing of things:)
Quark was one of the highlights of the series and in this story nothing much has changed about his character in fact as the Ferengi society adapts to the greater influence of women he considers his bar a last bastion of the traditional values but alas business is not good until the latest pre-release sampler of Vulcan Love Slave falls into his grasp. What comes next is a merry chase to track down the writers of this new version which is a generation ahead of the current series and Quark has to do some planet hopping along with his new "intern" which includes a visit to a trade fair, a few dangerous companions and as always with Quark things never quite go according to how he envisioned them.
Totally enjoyed reading Lust's Latinum Lost (and Found) and I am looking forward to the further of adventures of this Ferengi as I think I rather like this new look and feel of DS9.
Paula M. Block and Terry J. Erdmann have done a great job on this novella capturing the essence of Quark, well worth a read for a fan of the character or the series.

I also did a quick search on Deviant for Vulcan females and well am I blushing :)