Buck Rogers in the 25th Century
Episodes 6 and 7

Buck goes undercover to aid in the capture of a notorious criminal and when a threat to the Earth is uncovered he agrees to pose as this criminal and infiltrate the group who are targeting New Chicago. You know as plot synopsis goes that pretty sums up the episode and this is a two parter so hopefully a lot more was going on but surprisingly not that much.

So the episode in a little more detail, not quite sure why Buck was helping Wilma capture Raphael Argus since as we know he is not officially part of the the defence force infact they make a point of asking for his help when he poses as Raphael. We'll let it pass otherwise there wouldn't be a show called Buck Rogers and come on who would want to miss Buck hairy chest an all not to mention Wilma rocking the slinky dress as they go on their mission. The Legion of Death were a little bit comic book and hard to take them seriously, there is nothing about them that really provokes fear and since the Directorate have files on them it seems strange they are freely moving around the galaxy but I guess in this "universe" the Earth is really a second rate player. Anyhow Buck successfully infiltrates the group and even dodges the proverbial bullet when he meets Joella Cameron played by Markie Post a former girlfriend of Argus who for her own reasons plays along with Buck, fortunate that:)
The Directorate is attacked once again when it's launch bays are sabotaged revealing a paid traitor in their midsts, it seemed strange the guy was casually watching the mayhem considering if the place blew he was going with it but it does explain how bombs were being planted in the complex. It seems easy for any bad guys to directly enter a secure complex or simply bribe a human into acts of treason but again it has to be or the story goes nowhere. Buck having passed the initiation is learning of the ultimate goal of striking New Chicago via it's power generation complex which uses a matter/anti-matter system which to me seems suicidal on a planetary surface, I would have thought cooling would be a serious issues since it's built in a wasteland so no water and of course no benefit from the vacuum of space.

Well to cut a long story short and believe me this two parter had plenty of padding Buck is unmasked but successfully convinces the League his is a freelance assassin looking to score big which gives him time to make an escape with the aid of a Varek and eventually follows the League back to Earth where they have already secured access to the power plant by threatening one of the few engineers who have access. Now this was very clever, intelligent use of influence to get what they want combined with convincing the mark they are thieves rather than terrorists. It was however a little silly how such a high value facility is so lightly protected especially considering we know the galaxy is a dangerous place and Earth no longer seems to have a defence shield. So the terrorists disrupt the magnetic containment of the matter and antimatter and then Varek again makes the decision to act and a fight breaks out which gives the defence force enough time to arrive and secure the control room. It was rather amusing how often these bad ass Legion of Death use stun weapons, I thought the engineer had bought it but no he was up and about in time to offer the almost suicidal task that was required to prevent the explosion. Varek again steps forward and phasing through the containment and resets the controls but is tagged by a stray atom of antimatter, no sure how he survives but it gives us that "all will be well" moment as Wilma treats him as normal person and offers help to ease his pain.

It's not done though, the rest of the Legion flee the planet and Buck and Wilma in their starfighters give chase, now we get the ridiculous use of telekinesis to control Buck's ship which given the speed, mass and range seems a little bit much. Not to worry though Wilma saves Buck and the crowd cheered, even a couple of decades ago the hero being saved by a sidekick let alone a woman was rare in an action show. The episode wraps up with a comic moment as the gang get together and we see that Joella will be starting a new life and Twiki may be channeling Buck a little too much:)
The Plot to Kill a City isn't a bad episode, the plot isn't good enough to sustain two episodes though which is where your attention could end up going bye bye, edit it down and it would be a pretty tight story with some very good ideas. On the eye candy front they went to two, Markie and Wilma were rockin' and even the naughty Sherese could turn a few heads if she smiled once and a while:) 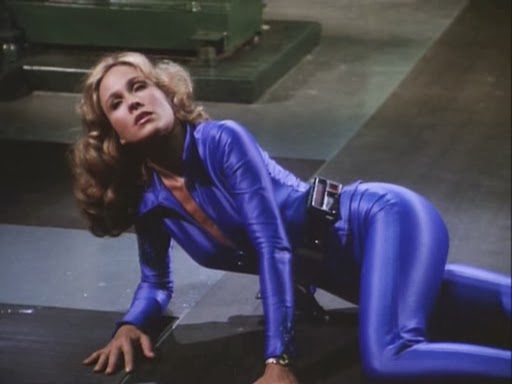 The Plot to Kill a City: Part 1 IMDB

The Plot to Kill a City: Part 2 IMDB