This story is feature length on the DVD, not sure if it was broadcast as such on
American or British TV since I certainly recall it being two episodes when I
watched yet on telly so long ago.
So another long range patrol which has Starbuck taking a nap, life sure has got
boring since leaving the Cylons far behind but hey the scanners pick up
a sub-light vessel with six life forms aboard. The Vipers take it in tow and as they
return the gossip washes through the fleet in expecatation of meeting people
from the planet Earth.
On arrival they find two adults and four children in suspended animation and
thus begins the political back and forth and power play between Adama and
the council with the warriors and security men as the pawns.
The issues surrounding opening the pods despite the risk of death has
Apollo championing their release to continue their journey unmoloested, the male
awakes and being confused and under pressure stuns a security officer.
The council demands action which allows a small window of opportunity to remove
the ship and it's passengers from the Galactica and send it on it's way.
Apollo and Starbuck escort the ship to the planet Paradeen where they find an
almost empty world but a ranch built for the group over seen by two humanoid
robots.  The history of the world and the conflict with the ominous Eastern Alliance
is then revealed and indeed a warship of this powerful entity is heading for
Paradeen as it has detected unidentifed vessels (the Vipers).  After a little angst and
family drama which leaves the Vipers badly damaged the colonials capture the
Eastern Alliance ship and return to the Galactica leaving this new family behind and
hopefully safe from reprisals.

Ok then a feature length episode which actually went by pretty quickly which is always
a good thing but the episode did feel a little different with the introduction of these
new humans and the power play on board the Galactica. The Eastern Alliance with it's
political overtones of the later 70's and the Cold War mixed with Nazi vibes was certainly
different to the Cylon menace but works pretty well. I'm not sure if someone born after
the fall of the wall and the Cold War ended will get as much out of this as is being offered
but you can never go wrong with a call back to the Nazi regime.
Lets begin with the little nitpicks and they are, you don't get so far into a series from
this era without being able to accept some of the limitations and choices made in television
production back then.
So why such a long patrol, I'm pretty sure having single seater fighters with sleeping pilots
is not a good thing especially given long range sensors the Galactica can deploy and when
they find the lower tech ship I didn't quite understand why they automatically assumed they
were from Earth and not just another remnant of the original exodus.
I did of course love the disco lighting on the sleeper units, very much of the era and speaking
of the social standards of the time Athena a bridge officer is now the school teacher, granted a
hot school teacher but the kids are too young to appreciate her in that respect:)
It's strange this is perhaps only the second time the colonial security have made their presence
felt, granted they were needed to enforce the council's decision but it all seemed rather petty
and perhaps indicitive of the time they have for such things with the belief the Cylons are not
a problem anymore.
There were some good laughs with the hide the alien and Jolly got his time in the spotlight but
it all seemed forced especially the callous disregard for the lives of the people on the ship but
then again the powers that be have ignored their own people in steerage for so long so maybe
not that much of a surprise.
The biggest issue with this episode is the manipulation of time, speed and distance when dealing
with all the ships and their journeys, the small shuttle like vessel (repainted for Buck Rogers)
was sublight so really couldn't go anywhere significant in the time scale the story was set in
but we've ignored the issues with  light speed and flank speed etc so shut up Michael:)
So we have the Alliance, great look ship and the uniforms well black and shiny so they much be
bad guys even with when wearing a helmet visor indoors. The ship unlike any other also gave us
the cramped submarine feeling often attempted on other shows but rarely achieved and we get a
very definite dialogue as to how nasty these people really are, no confusion at all. 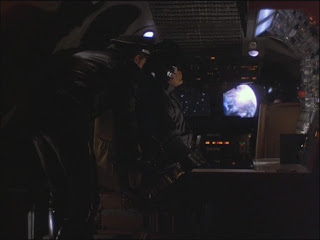 It was interesting that Terra has given birth to at least two political factions who have achieved
interstellar flight yet someone co-existed for so long to reach that point, not quite sure that is
a reasonable situation unless there is a lot more backstory we are not privy too.
When we finally get to Paradeen we meet the two androids (Hector and Vector) who were awful
in terms of the story, the hunour they were supposed to bring has not aged well and we also have
the issue that sentient androids exist but the rest of the technology seems a little lagging right
down to the appearence of a Laserdisc.
However the use of the Expo 67 building in Quebec was genius and production gold, like many
developments built for exhibition they have an impractical look which is easily substituted for
an alien asthetic. The ravages of the Canadian weather also gave the structures more of an
abandoned look to them so in this respect BSG were blessed to have access to them. 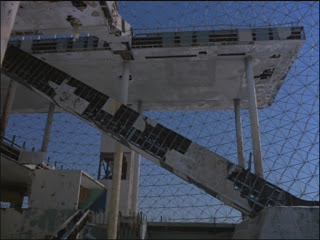 The romantic or angst element of the story brought forth by Sarah ( Kelly Harmon ) and aimed
at Apollo seemed a little quick and was resolved just as quickly but the studios love a happy
ending and a group on a frontier world banding together as a family is very American.
The episode closes with the Alliance destroyer landing on the Galactica and the crew being
awed at the size of the Battlestar setting the scene for the inevitable conflict as the fleet could
not and would not avoid getting involved with the humans on Terra who are the next step in
their journey to Earth.