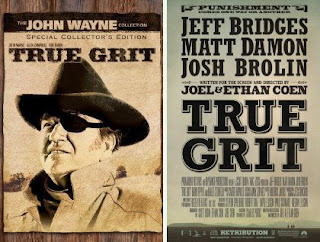 A quick recap of the story for those who haven't seen either version.
A ranch owner is murdered by one of his employees and the victims daughter travels
to the town of his death to wrap up his affairs and to seek justice via a local Marshall
she hires for the job, legally and above board. Complications arise when a Texas Ranger
joins the group as he seeks the same man and the unusual trio ride into the Indian lands
to seek out the murderer and the group he is now hiding out with.

I've watched both of these movie in the last week and enjoyed them both but for different reasons.
First off the 1969 John Wayne version of the Charles Portis novel which I watched on Blu-ray.
It has to be said that The Duke pretty much always played himself and there is nothing wrong with
that as his larger than life demeanour works well for the character of Rooster Cogburn and the casting
of Kim Darby (Mattie Ross) and Glenn Campbell (LeBoeuf) both work well and the audience gets the
"pain in the arse" of Mattie required to do what she does in the movie and the easy going yet component
side to the Texas Ranger LaBoeuf.
In 1969 the classic western was nearing the end of it's reign and more and more relied on celebrity and
Glenn Campbell's casting is an aspect of that but at least he didn't sing unlike a few westerns that
cast well known singers and that includes the odd JW movie.
That said this movie still holds true to mixing humour and a light side to what is a violent movie
even though violence in westerns always seems to be regarded differently than in other genres.
Overall the production is excellent, the photography is clear and very appealing showing the vistas
of California and Colorado but the stage work seems for some reason small or compact although very
familiar to anyone who liked westerns.
A cracking western for it's era, one of the last before the grim and grit of the 70's changed things.

The Coen Brothers version of the same novel had me a little worried when it was first announced
but the trailer washed away those concerns and the movie proper was excellent. It is very much
a product of it's time and that is the challenge in taking a genre rooted in the past and bringing
21st century demands to the production. The casting of Jeff Bridges was inspired and like
John Wayne before him he does what he does very well, decades of experience probably made t
his role rather easy to deliver yet you never
doubt the character. Hailee Steinfeld plays Mattie Ross but as a younger girl which makes her
performance perhaps more appealing than Kim, it was tougher to do and maybe added an edge to
the movie more in line with the darker aspects of the novel. The casting of Matt Damon raised
a few eyebrows but you know I would not have recognised him nor his work as LaBoeuf and i
sn't that one of the aims of acting, to be someone else.
This version of the movie looks very different, it's a lot darker and grimey which is a style we
are getting used to and works well if the source material suits and in this case it does.
Overall the Coen's have produced a very entertaining modern looking yet familiar western
which is no easy task if only to convince the money men that the movie is viable in today's market.

At the end of the day as these two movies are both based on the same book it's safe to say if you
liked one you will get something positive out of the other however in regards to which is you favourite
that may simply come down to your age and how you view the western genre.
Personally I prefer the John Wayne version, I am used to the Duke and prefer the lighter touches of
that movie but there is no questioning the quality of the Coen Brothers production and at the very l
east watch one or the other.
True Grit (1969)
True Grit (2010)
Posted by Jarrak at 11:42