My Random Journey Through Trek #53

Who Mourns for Adonais?
Star Trek

The Enterprise is doing a little routine planet mapping and is on approach to Pollux IV an unremarkable world with no records of being populated but they detect an object approaching them in the shape of a giant human hand. Spock says it's pure energy but it tracks the ship's efforts to evade and grabs hold of them in the manner of a very powerful tractor beam. The optical scanners pick up an image of a human face, audio is also being broadcast towards the ship and the entity welcomes and praises them for the journey they have undertaken and being so far from their homeworld. Kirk is a little put out but nothing seems to phase this being and he invites the Captain and his officers (not Spock though) down to the planet. 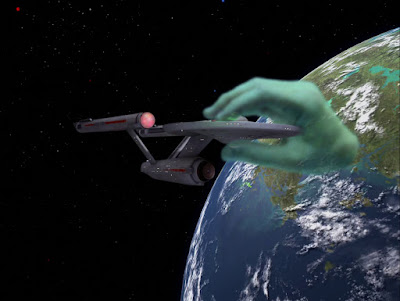 Upon arrival they are greeted by a scaled down version of classic Greek architecture and the being now in standard human form lounging on a what amounts to a throne. He greets them and introduces himself as Apollo the very same from classic mythology, again he is pleased by the development of his "children" and especially the beauty that is Lieutenant Carolyn Palamas but soon he shows his impatient side as the crew refuse to automatically bow down and worship as their ancestors did 5000 years ago. Scotty feels the brunt of his anger when he takes exception to Apollo's interest in Carolyn but she agrees to go with Apollo and learn some of his secrets. Back on the ship Spock is driving the crew hard to break through the communications interference and the energy field that is holding them, slow progress is being made but they eventually succeed. Kirk and the landing party have deduced that Apollo is drawing his energy from the environment and more importantly via the temple, he has the ship phasers targeted on the building ready for the right moment. Kirk orders Lt Palamas to spurn the advances of Apollo to anger him and when he is drawing upon his power to punish her they destroy the temple and with it the hold this "god" like being has on them. Apollo is devastated and calls upon his fellow travellers to embrace him as he fades from this reality. 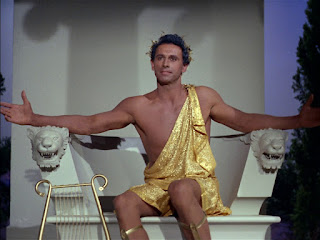 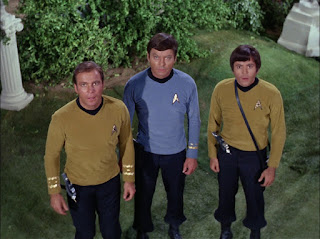 The episode kicks off with a standard bridge scene along with the character of the week one Lieutenant Carolyn Palamas ( Leslie Parrish ) but soon goes off the rails as the behaviour of well the human males is not exactly up to modern day standards nor I expect of the military at the time at least when on duty. Scotty calls Lt Palamas by her first name and asks her for coffee even though she is currently in the middle of doing her job which probably doesn't take her to the bridge too often. McCoy and Kirk both talk about her openly on the bridge and even mention the cringe worthy aspect of her eventually settling down to married life and leaving Starfleet to be a wife and mother. Anyhow as they near the plant the energy field is detected and everyone stands and stares at it, it takes way too long for Kirk to order evasive action and then it's too late. I did like the idea the energy field was adaptive enough to mimic a hand and apply direct pressure but I wasn't quite sure why when pressure on the hull was increased it made any practical difference to the well being of the crew, the air processing in a starship should be pretty bullet proof or so I would have thought. So they are invited to the planet, no Spock though who is probably grateful he won't have to put up with the sounds of the pipes:) I found it hilarious when Palamas asked why she was in the landing party, she does realise what she actually does for a living or was it more to remind the viewers why she was there, either way attractive women studying ancient societies etc are almost as at risk as a red shirt! So we meet Apollo, pretty good looking dude although it looks like his nipple has been powered/foundationed over to avoid inflaming the ladies but when he does his impressive growth spurt the simple trick of having the actors maintain eye contact with the camera as it rises worked very well, nothing fancy just let the actors sell the surprise and awe. We also see a very disturbing look on Kirk's face as he realises he may have just bitten off more than he can chew but then crash bang as Apollo says Palamas is "wise for a woman". Oh yeah no question she is a woman when he with a wave of his hand changes her outfit, nice touch to do in front of the statue with a similar outfit and kudos to the costume department for creative use of sticky tape/glue to keep Leslie's bits hidden from view:)
We also get the notion that the Greek gods were indeed a space faring species that came across the Earth and "fed" off the worship of the primitive peoples in and around Greece at the time, say what you like the modern world owes an awful lot to the ideas and concepts that came out of that region regardless of who the people at the time considered deities. Of course one of the myths is how a few of the gods dabbled in the pleasures of human female flesh and Apollo has taken a serious shine to Carolyn and well not to make too fine a point she seems interested and I think we are supposed to believe that something happened between them, After the fact it came to light that one missing story element was that she ended the episode pregnant, a bit advance for US network tv back in the day it seems. I loved Spock and Sulu as they discussed scanning the planet for the energy source, scan where it isn't, there was some good chemistry between the two actors, pity it was never really developed. Kirk finally hatched his plan and and while the first attempt failed (thanks to Palamas) when he finally convinced her to turn her back on Apollo she did a real number on him and to be fair Palamas did a good job exploiting the attraction Apollo had for her, a lot of exposition was given as she talked to him. Uhura also got to flex her muscles with actually working on her communications board, we know she is more than just a switchboard operator but often the show doesn't do her justice so despite some dodgy dialogue in terms of what women were considered to be back then we also got two female characters performing well.
Finally Kirk and Spock are communicating, the ship's phasers are targeted on the temple yet the guys are casually standing in the structure, that's pretty stupid and I really think it was set up that way for Kirk to do a run, jump and roll as he commanded Spock to fire. Oh and credit to everyone involved in creating the storm that Apollo launched towards Carolyn, all on stage of course but it looked pretty good.

Who Mourns for Adonais? is one of original series stories that gets a lot of respect upto the point of being the kicking off point for the Star Trek continues movie “Pilgrim Of Eternity” and not forgetting the episode itself draws upon an established mythology that permeates western society. It's an interesting concept that the Greek gods were space faring beings who used their knowledge and technology to set themselves up as divine beings who like humans eventually could not put aside the base elements of some of their natures. In this episode Apollo seems impressed by the strength of character of his "children" but doesn't seem to realise how much they have changed perhaps because he hasn't in the 5000 years since being on Earth. For all the negative aspects he sees in Kirk and company he too expresses them with arrogance, indifference and anger combined with a fragile ego.
Overall this could have been rather cheesy but good acting and some good effects worked in the episodes favour.