My Random Journey Through Trek #43

The Enterprise has been tasked to the non-federation world Motherlode in the Arcadian star system to arrest Harry Mudd for his usually litany of crimes across this part of the quadrant. Harry is doing his best snake oil act by selling a "love potion" to the local minors but Kirk reveals that his "test subject" is not a beautiful woman by an alien which can morph itself into any shape. As the crowd threatens to riot Harry asks for protection and he is arrested and beamed up to the ship where the paperwork and medical required is undertaken. Harry overhears Chapel and Spock and gleams that she is infatuated with him and he offers her the crystal (love potion), just rub it on your skin and touch the intended and he will love you with all his heart and eventually she is convinced. Harry of course uses the opportunity to steal her ID card and escape from the brig and from there gain access to the shuttle bay. Chapel tries the crystal but Spock is unaffected and she tracks Harry down and shots are fired, one of the crystals break and the drug aerosolises and is pulled into the ship's ventilation system where it affects the crew. 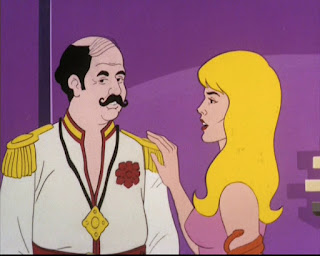 Harry escaped with Chapel on a shuttle to a planet they are orbiting and Spock demands to rescue Chapel the woman he loves so he and Kirk beam down and have to battle rock like creatures while the crew of the ship fall in love with each other. Thankfully the effects of the drug are short lived and as the creatures close in on the landing party the four humans are in the nick of time beamed aboard safe and sound.

Funny enough Harry Mudd was the focus of discussion on a recent episode of the podcast Women At Warp so this was an episode I was much more familiar with than many I haven't seen for a few years. Harry is a favoured character in the series, his daughter was even referenced in the JJ verse so something must have been done right and I think we see the character eclipsing his deeds because quite frankly most beings pulling these stunts wouldn't survive or would end up in a penal colony.
In Mudd's Passion we have Harry trying to hoodwink mine workers (various species) by offering what we now would consider a date rape drug, it's shown to be fake on the planet which then begs the question if Motherlode was not affiliated with the Federation then what is the Enterprise doing there in the first place? Of course the immediate solution is to provoke a situation where the Harry asks to come with Kirk back to the ship where a warrant can be applied but tricky legal ground I would have thought. Let's not get into why a Constitution class starship was pretty much acting as a bounty hunter. So Harry is in the brig but Chapel is left to do the medical, again security should have been present and it was a smack in the face for Chapel's character that she let her desire for Spock affect her judgement or buy into the garbage that Harry was trying to sell. No doubt a sign of the times that the drug would only create love between a male and a female and just strong friendship between same sex people, species regardless.
So Chapel gets conned and loses her ID card which Harry alters to work for him, ok I know Harry is slippery but I never quite thought he was that smart when it came to Starfleet tech but we'll let it go (again) and eventually another shuttle gets stolen from the Enterprise, a common occurrence it seems across the generations of starships with this name. I was a little perplexed why they also came across an uncharted star system, doesn't make a lot of sense given the centuries of star searching by telescopes and deep space exploration but fair enough. The planet doesn't seem to be inhabited by Harry is convinced he can prosper until these huge creatures which look like dinosaurs made from rock arrive and look a little peckish. Spock it turned out had been affected and I suspect Leonard had fun playing a love struck Vulcan and while everyone seemed surprised by Spock it was Kirk who agreed to beam down with him to save Chapel. It was a little daft that at one point McCoy seemed unable to put two and two together and connect the love potion with Spock's sudden emotional outburst. I did like Lt. M'Ress and Scotty getting it on, they show may have had issues with same sec but interspecies not a problem at all and I wonder if the scene of Jim and Spock partially hugging was also put in just to indicate more than male friendship.
Harry is rescued of course and is sent to rehab where he can no doubt if required complicate the lives of the Enterprise crew once again.
Mudd's Passion had some fun moments but has dated itself quite badly in allowing what amounts to molestation and maybe rape to be a core theme of a children's animated show but then look closely there are some positives. I suspect your enjoyment will be seated in if you can allow the more negative aspects to negate anything positive from the story. Strangely enough a similar character was used in Stargate Atlantis and he too used a drug to sway the affections of women towards him, the same criticisms of that episode apply here yet more so since SGA was written in a so called more enlightened time.